over 40,000 young people have seen the safe drive stay alive roadshow over the past 10 years. 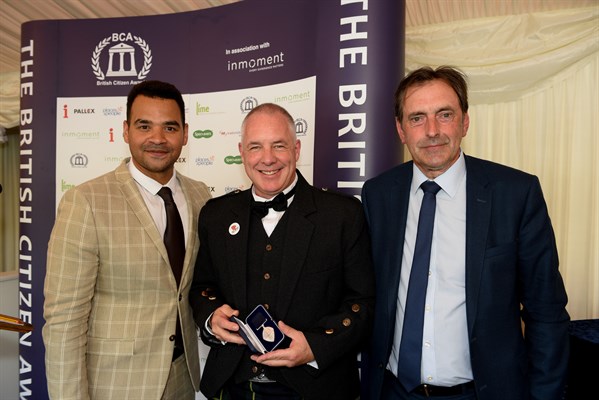 A firefighter who has dedicated more than a decade to keeping people safe on Scotland’s roads has been recognised with a national honour.

Local Area Liaison Officer Alan Faulds, who is based at Alloa fire station, has been given a British Citizen Award for his services to the community.

The British Citizen Awards (BCAs) were launched in January 2015, to recognise exceptional individuals who work tirelessly and selflessly to make a positive impact on society.

Alan was one of 30 medallists who was honoured at a prestigious ceremony on July 6, at the Palace of Westminster.

Speaking about his nomination, Alan said: “I’m not normally short of words but when I found out about the award, I was speechless.

“Firefighters stand on the front line at traffic related incidents – and we see all too clearly the very serious consequences. We are therefore motivated to prevent them from happening in any way that we can and that effort will never falter.

“I was incredibly humbled by the fact that someone had taken the time and effort to nominate me.”

Alan was nominated for a BCA by Central SDSA treasurer, Melanie Mitchell, who said: “Alan has been the driving force and he gives a lot of his time and energy to the group.

“He is passionate about road safety because, through his job, he has seen the consequences first hand and is very motivated to make children and young people aware of the importance of his message.”

The group was established to address the need for an effective road safety initiative in Central Scotland, due to the significant number of deaths and life altering injuries affecting those mainly in the 16-25-year-old age bracket.

Alan was instrumental at the start of the project and continues to steer this group, in partnership with Police Scotland, the Scottish Ambulance Service, NHS and three local councils.

It airs a powerful film depicting a re-enactment of an actual road collision involving young people. After the film, real-life family members of people who have been killed or suffered injuries go on stage describing how this has affected their lives.

Safe Drive Stay Alive is now running in its 11th year, with over 40,000 young people in Central Scotland having seen the show and heard its message.

Statistics show that road deaths and injuries have fallen over the ten years the show has been running - which proves that early intervention and education can produce positive results.

Advice on how to stay safe on the roads is available at www.roadsafetygb.org.uk/