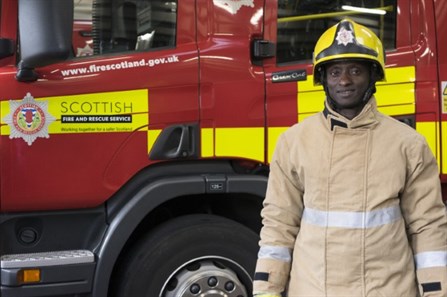 A firefighter has told how he moved 4000 miles to settle down in Scotland – and was warmly welcomed into the Fire Service family.

Joseph Mendy left his native Gambia to provide a better life for his wife and three children by working hard to become a firefighter.

And he said the help and assistance from serving personnel supported him through the tough recruitment process – to finally pull on the uniform with pride.

Joseph, who lives in Moffat, Dumfriesshire, spoke as the Scottish Fire and Rescue Service prepares to launch a national recruitment drive.

The dad, aged 41, said: “I wasn’t sure what to expect in the interview and I found it quite challenging.

“It was quite daunting being from another country and stepping straight into a whole different culture.

“But I knew a few people in the Service who gave me advice and I studied hard to learn what the fire service is all about – because it isn’t just about fires.

“We attend at a whole range of different types of emergency and we also carry out a lot of prevention work to help people stay safe, particularly the vulnerable and the elderly.”

Joseph added: “It’s the perfect job for me.” 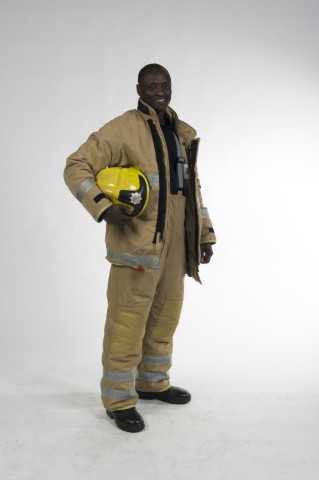 The super-fit firefighter left his homeland in 2005 with wife Tracey and sons Peter, Joshua and Adam and became a crew member four years later after holding down several different jobs.

Joseph said: “After I moved to Scotland I had to wait for citizenship before I could apply to the Service so I took any job I could to support my wife and three boys.

“I did some security guard work and then I got a job in a local pie factory.

“I’m all about fitness as I was a fitness instructor before I moved here. The fire service in Gambia wasn’t a career path for me but the Scottish Fire and Rescue Service was.

“I look forward to coming into work and my watch are a great bunch who look out for one another.”

Despite his busy role, Joseph enjoys a good work life balance. He is based at Sighthill fire station in Edinburgh but doesn’t mind the commute as his 14-year-old son plays football in the city.

And his shift pattern also allows him to spend quality time with his wife and sons.

He said: “Working the shift system works great for us. We can spend quality time together and the holidays allow us to be flexible for school breaks.”

Joseph encourages others to think about signing up with the Scottish Fire and Rescue Service.

He said: “I would recommend a career as a firefighter. Every day is different and you get to help people. There are so many learning opportunities in the service from water rescue to rope rescue. We have the chance to train in all areas of the fire service - and not every job can say that.”