Pic: Anthony Quintano - Beams from searchlights recall the former presence of the Twin Towers on the New York skyline.

A highly experienced firefighter will take part in a major charity event marking the sacrifice of American colleagues in the wake of the 15th anniversary of the 9/11 terror attack.

Andy Coueslant is a Deputy Assistant Chief Officer in the Scottish Fire and Rescue Service and responsible for service delivery across the north of Scotland.

He is currently in training to run the Tunnel to Towers 5k in New York on Sunday, 25 September to raise charity funding both for the Fire Department of New York as well as injured or ill UK firefighters.

Andy said: “This is a chance to give something back to people who stand on the front line for us. The more funding I can raise, the more our firefighters and their families will get the support that they need.”

The poignant Tunnel to Towers route follows the last ever journey taken on September 11, 2001 by firefighter Stephen Sillers.

Stephen had just finished his night shift and was on his way to play golf with his brothers when he learned of the first plane hitting the Twin Towers over the radio in his truck.

He returned to Brooklyn’s Squad 1 to get his gear and drove his truck to the entrance of the Brooklyn Battery Tunnel, but it had already been closed for security purposes. 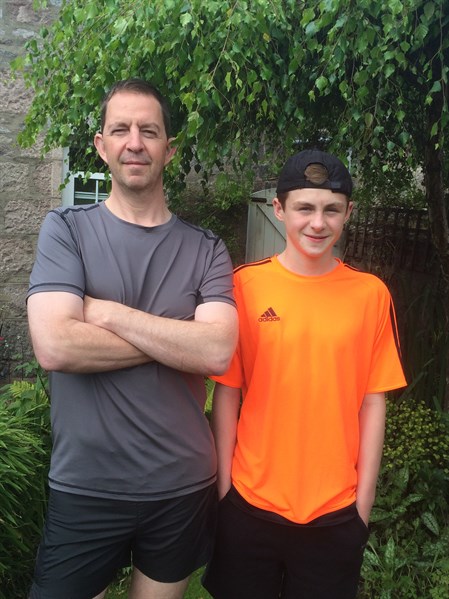 Determined to carry out his duty, he strapped 60 lbs. of gear to his back, and raced on foot through the tunnel to the Twin Towers - where he gave up his life while saving others, alongside 342 other firefighters.

Aberdeen-based Andy decided to join hundreds of colleagues in the emotional tribute to Stephen and all the victims of 9/11 after serving as a firefighter for over 30 years in Scotland.

He will be accompanied by his son Archie, 14.

Dad-of-two Andy, 49, said: “I decided to take part in this race after learning about it through my work with The Fire Fighters Charity in Scotland which supports those who are in need of assistance through injury, illness or bereavement.

“I have served as a firefighter for 30 years and I want to give something back to our firefighters here and to show support for our colleagues in New York.

“I look at the sacrifice of Stephen Sillers and there is no greater reason to put on my running shoes.

“I can remember, as we all do, being moved by this desperately sad event and the huge loss of firefighters, responders and members of the public. I read Stephen’s story and understood his sacrifice.

“My son Archie was not even born when this happened. In some way, visiting America will teach him about that sacrifice and how we strive to heal and move forward together - but never forget.”

You can help Andrew Coueslant raise money for this cause: https://www.justgiving.com/AndrewCoueslant?utm_source=Sharethis&utm_medium=fundraisingpage&utm_content=AndrewCoueslant&utm_campaign=pfp-email.