Staff from Perth fire station have had charities at the forefront of their minds this month after raising almost £2000! 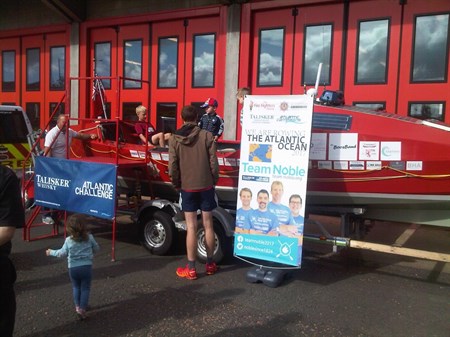 The Talisker trans-atlantic rowing boat at Perth Fire Station as part of charity events. The boat is crewed by members of The Scottish Fire and Rescue service.

Staff from Perth fire station have had charities at the forefront of their minds this month after raising almost £2000!

The charity fundraisers started off on 10 September when the crew took donations at the station for their charity car wash event in aid of the Firefighters charity.

After drying themselves off the crew counted a total of £944 donated on the day.

Crews continued their public events by giving guided tours of the fire station on Saturday, 24 September.

The event which was part of Perth and Kinross Doors Open day also saw firefighters offering members of the public basic CPR training.

The charitable staff also held a coffee morning in aid of MacMillan Cancer research on Sunday, 25 September which saw on and off duty firefighters as well as members of the public undertake in some home baking and take donations for their creations on the day.

The coffee morning raised £800 and a further £250 for the Firefighters Charity.

“It means a great deal to be able to contribute to very worthy charities and we hope the money raised can make a difference.

“We would like to thank the members of the public who donated during our charity events”.

The total raised for the various charities currently stands at £1994 with further donations still coming in.