Firefighter speaks of crucial training that helps save lives

The Scottish Fire and Rescue Service launched the national recruitment campaign on 13 September. 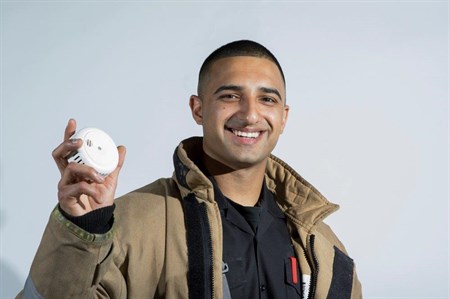 A firefighter has spoken of the moment he helped save the life of a suspected cardiac arrest victim.

And Shahbaz, 28, told his new skills were put to effective use when a man suffered the cardiac arrest while with his family.

He spoke as the Scottish Fire and Rescue Service prepares to launch a national recruitment drive.

Shahbaz said: “It is a moment I’ll never forget.

“I’ve seen things in this job but being able to stabilise the casualty and improve his chances of survival – for me – is my greatest achievement of this job.”

Shahbaz was just about to clock off work when he and fellow crew mates at Falkirk were alerted that the man in his 40s had taken the cardiac arrest in the Bo’ness area on 14 July.

They immediately began working on the casualty whilst reassuring family members at the scene.

Shahbaz said: “I worked with the other team members to stabilise the casualty and begin chest compressions.

“The hardest part is reassuring the family members who are with you, letting them know that you are doing everything you can for their loved one.”

The crew had learned the vital skills from their Scottish Ambulance Service partners as part of a range of measures to create a nation of life savers.

This is part of SFRS’s commitment to supporting the Scottish Government’s Out of Hospital Cardiac Arrest Strategy - which aims to dramatically increase patients’ survival chances.

Their work includes the introduction of public access defibrillators.

And there are now more than 100 Volunteer Community Responder schemes across Scotland who are trained and equipped to deliver early life saving care.

Shahbaz said: “As a result of the outstanding efforts to save even more lives, we are trained as first responders and receive regular training to maintain competency in this field.

“The service has the resources, equipment and personnel to attend OHCA incidents. I believe it is a positive change I actively support and encourage it.”

Firefighters can attend a whole range of different types of emergency including blazes as well as rescues from height and water rescue.

They also visit residents through their free Home Fire Safety Visit programme where they will check or install smoke detectors and offer safety advice.

Shahbaz, originally from the West Midlands, is encouraging others to apply to become a firefighter.

He joined the service in 2010 serving at Bo’ness then Falkirk fire station where he has been for the last three years.

He said: “The recruitment process was straightforward - but it is so competitive.

“I would tell anyone considering applying to research the role so you know what you are going into and go for it! Don’t stop trying!”

The Scottish Fire and Rescue Service is seeking to recruit up to 200 new firefighters over the next two years.

If you are inspired by Shahbaz’s story and would like to have a career at the Scottish Fire and Rescue Service, visit /peoplelikeyou or follow #PeopleLikeYou on social media.

Our recruitment campaign opens on 13 September and everyone has several weeks to apply.