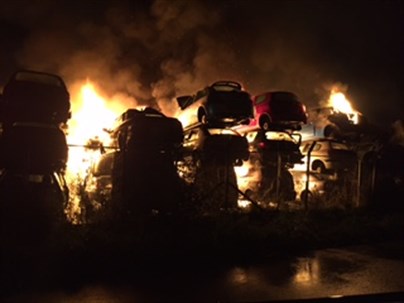 Crews were alerted to the fire at the yard in the city’s Beryl Street at 9.20pm and a crew from Kingsway Fire Station rushed to the scene.

On arrival firefighters were faced with a well-established fire, with around 40% of the 100m x 75m area well alight.

The fire was brought under control by 12.45am this morning (20 September 2016) and Scottish Fire and Rescue Service’s fire investigation unit is attending today to establish the cause.

Station Manager Grant Nicoll, who was at the scene last night, said: “Our crews did an excellent job and prevented the fire spreading to a nearby tyre yard and a quantity of plant equipment nearby.”