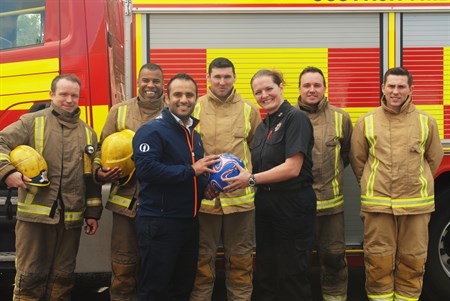 A firefighter is hoping to become the next ‘Hose-y Mourinho’ in a charity football match against his police pals.

Leroy Shaw is staging the showdown between the Scottish Fire and Rescue Service and Police Scotland to raise funds for Tilly Sharkey.

Tilly, aged five, has been diagnosed with a rare brain tumour affecting less than 40 children per year.

She is currently receiving pioneering cancer treatment in America to try and save her life.

The treatment costs around £40,000 a month- so far around £110,000 has been raised through various fundraising events.

And Leroy is pulling out all the stops in a bid to keep supporting the family.

The football match is being staged at Meadow Park, Irvine on 18 September.

The fun, family event will also include bouncy castles, face painting, live owls, a carousel, a fire engine and police car, and within the bar area live music will be played by Claire Latham.

And there will be a half-time show by ACDA and Kilmarnock FC cheerleaders.

Leroy, 35 said: “When I first heard about Tilly, she just went straight to my heart – I am absolutely determined to do everything I can to help her and her family at this difficult time.

“Firefighters are fit and healthy and so are our police colleagues so it seemed only natural to challenge them to a friendly match to rally our entire community behind this inspiring charity effort.”

But Leroy, who is based at Dreghorn Community Fire Station, added: “I should warn my police friends that I am a bit of a legend when it comes to strategy – in fact, you could say I am the Fire Service’s answer to Hose-y Mourinho.”

The charity event has the full backing of Tilly’s family whose mum, Michelle, will be attending.

Michelle said: “We are really just overwhelmed that people are going out their way to help - their full support has been great.

“We really appreciate everything that has been done.”

The match will begin at 2pm with donations taken at the Meadow Park gates from 12.30pm

The game will be sponsored by Perry Uppal from Taj Tandoori in Prestwick who will very kindly match and donate all of the money raised on the day.

KA Leisure have also helped out with donating one of their pitches free of charge for SFRS to play a warm up game against Royal Mail.

To help the Sharkey family donate to https://www.gofundme.com/save-tilly

The Scottish Fire and Rescue Team are:

Police Scotland will line up: