The visual event was a collaborative effort from Scottish Fire and Rescue Service, Police Scotland and Aberdeenshire Council 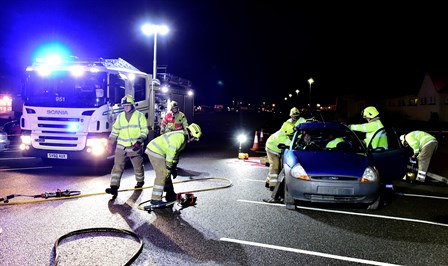 Photo courtesy of the Press and Journal newspaper

A dynamic road safety event was held in Stonehaven last night to help highlight to the community the dangers which exist on Aberdeenshire roads.

The event, which was well attended by the local community, involved presentations from both emergency services which were geared towards highlighting the importance of safer driving and awareness on the roads.

The event is just one of many initiatives SFRS and Police Scotland are involved in to help reduce the number of people killed or seriously injured on Aberdeenshire’s roads.

Station Manager Stuart Cruickshank said: “As we enter the time of year when daylight is shorter and the weather is becoming poorer, we hope to raise awareness of the importance of driving according to the conditions.

“Working with our partners at Police Scotland we are bringing road safety in the area to the fore, demonstrating how the public can take control of their own driving style and raising awareness about the consequences of a road traffic collision and how collisions can be avoided.”

The themes of the presentations were designed to make drivers aware, especially younger drivers, about the dangers which exist and responsibilities they have when getting behind the wheel.

The 4 driving themes were:

On the night a crash scenario was set up with the police car attending first to assess the scene, followed by two fire appliances from Stonehaven. Crews released a casualty from the vehicle using specialised hydraulic cutting equipment.

Visitors were shown the equipment in action and extrication techniques used by the fire and rescue service at the scene of a road traffic collision. The incident was then handed over to Police Scotland to look at road collision investigation work.

During the practical work, officers from SFRS and Police Scotland spoke to spectators and answered their questions.