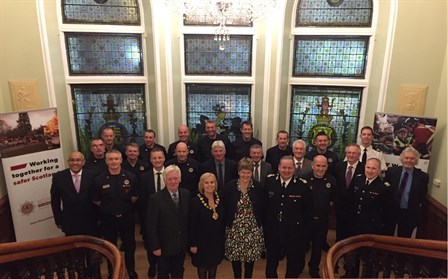 The Scottish Fire and Rescue Service’s Chief Officer Alasdair Hay was in Inverness on Friday evening (28 October) to recognise the achievements and service of well-deserving members of his team in the north.

SFRS Chief Officer Alasdair Hay said: "I am delighted to be here in Inverness to present these Long Service and Good Conduct medals and retirement medals to these members of the Scottish Fire and Rescue Service family.

"Each and every recipient has earned this recognition whether it be for their long and loyal commitment to fire and rescue services and exemplary conduct for over 20 years or to mark the special occasion of their retirement.

“Everyone is a credit to themselves, their families, their communities and the organisation.”

Chief Officer Hay added: "You are also receiving your Long Service Good Conduct medals after a period of momentous change within the Service, as we merged the former eight legacy services into the largest UK fire service and the fourth largest in the world - the Scottish Fire and Rescue Service.

"But you continued to stand on the front line with that unwavering commitment so very typical of our firefighters.

"Looking back even further, you continued to stand on the front line as your role transformed and became ever more dynamic - not only fighting fires, but attending at road traffic collision, major flooding and technical rope rescue.

"And added to this is the amazing prevention effort to reduce the number of road accidents through education, and reducing the number of lives lost to fires through our home safety fire visits - going that extra mile I mentioned earlier, by engaging with our healthcare partners to ensure we meets the needs of the vulnerable to stay safe.

"Despite all of this, you work relentlessly to assist your communities at times of need through charity raising.”