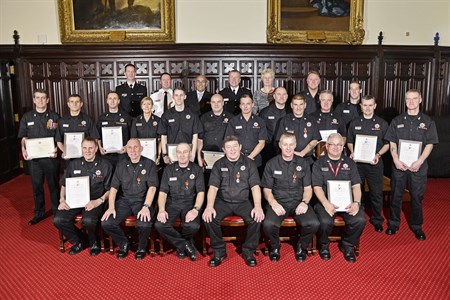 A group of dedicated firefighters who have protected the public for a combined 430 years have been recognised for their achievement.

And three further firefighters received a Chief Officer Commendation for their actions when they attempted to save a woman and young boy.

Their service to their communities was marked by Assistant Chief Officer (ACO) Robert Scott at Aberdeen’s Town House.

ACO Scott said: "It is my great honour and pleasure to be here this evening, on behalf of Chief Officer Alasdair Hay, to presents these Long Service Awards, Long Service and Good Conduct medals and a Chief Officer Commendation Award to our staff in the Scottish Fire and Rescue Service.

“Tonight’s ceremony is all about our award recipients and I must say that every single one of you has earned this recognition - not only for long and loyal commitment to the service, but for outstanding and exemplary conduct.

“You are a credit to the Service, to your Chief Officer, to the Board and to your communities - but most importantly to yourselves and your families.”

ACO Scott added: "This level of commitment over more than twenty years is impressive at the best of times, but, you are receiving your awards and medals after a period of unprecedented change within the Service.

“Since April 2013, we have merged the former eight legacy services into the largest fire service in the UK - the Scottish Fire and Rescue Service.

“That journey has not been without challenge and it has only been possible due to the commitment shown by our staff including those of you here tonight, and for that I want to offer my personal thanks.”

ACO Scott also presented a Chief Officer Commendation to three fire service personnel for their actions at Aberdeen beach on 20 August this year when they attempted to save a woman and young boy.

“It is with great sadness that, despite their very best efforts, both mother and son could not be saved. The thoughts of the Scottish Fire and Rescue Service are with their family, their friends and their community.” 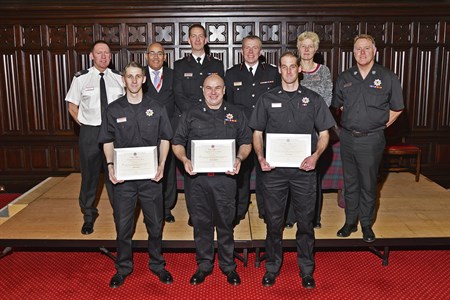