Andrew Adams thanks his family and colleagues 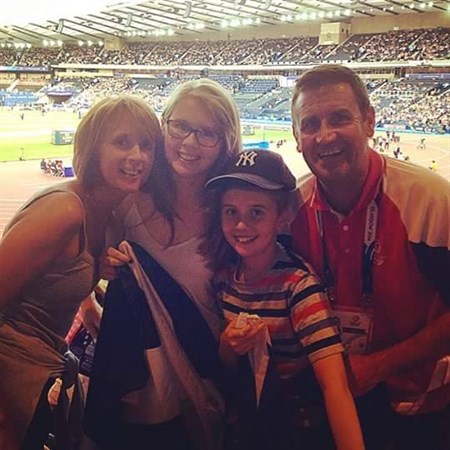 An experienced firefighter who was injured while responding to a suspicious fire says vital support from his Fire Service family has inspired him “to keep going”.

The father-of-two is still being treated at Glasgow’s Queen Elizabeth University Hospital.

Andrew, who is known to friends as “Andy”, is being supported by daughter Hannah, 22, son Darren, 14, and partner of 25 years, Clare Linning, who is a nurse.

He has had regular contact with friends and colleagues, and was recently visited by Scottish Fire and Rescue Service Chief Officer Alasdair Hay.

Speaking from his hospital bed, he said: “I just want to thank everyone for their support – my family and my colleagues.

“The Service has been behind me and so has the communities of Greenock and Inverclyde.

“All of that support combined has given me the motivation to keep going.”

He added: “The support that my family and I have received from my fellow firefighters is hard to describe.

“There has basically been support from right across the Service, from the top of the organisation right down.

“The Fire Service is like family. We are always there for each other.”

Andrew was seriously injured as he and his crew tackled the fire at Greenock’s Auchmead Road in the early hours of Thursday, 25 August.

Extensive efforts are now underway to raise funds to support the veteran firefighter.

He is presently watch commander for Group 4 at Greenock Community Fire Station.

Andrew said: “My friends and colleagues are wanting to do some fundraising for me and my family to assist with my long-term rehabilitation.

“At the moment, we do not know what we will need but that offer of assistance is invaluable.

“I would also like to express my sincere thanks to the fantastic NHS staff at the Inverclyde Royal Hospital and Queen Elizabeth Intensive Care Unit, as well as the National Spinal Injuries Unit.”