SFRS appoints new head of service delivery for the West

The role oversees a diverse region stretching from Dumfries and Galloway to Argyll and Bute, including both the Greater Glasgow metropolitan area and some of Scotland’s most rural and remote communities. 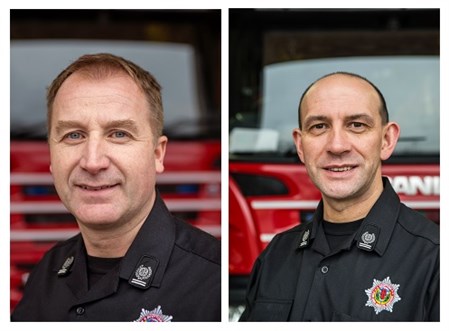 Above: When DACO Paul Connelly (left) retires in September he will be succeded as head of service delivery by DACO Peter Heath (right).

The Scottish Fire and Rescue Service (SFRS) has appointed a new head of service delivery for the West of Scotland.

Peter Heath has decades of experience as a frontline firefighter and senior officer.

He rose through the ranks to assistant chief officer with the former Lothian and Borders Fire and Rescue Service then, in 2013, became the new SFRS’s local senior officer for Midlothian, East Lothian and the Scottish Borders.

He was promoted to SFRS deputy assistant chief officer in 2015 when he accepted the post of head of human resources and organisational development.

The head of service delivery for the West oversees a region spanning 13 local authorities, including both Scotland’s largest city and some of the country’s most rural and remote communities.

“Since taking on his current role he has been instrumental in ensuring that we have continued to deliver excellent fire and rescue services to communities throughout this large and incredibly diverse area.

“I’m delighted he will be handing on the reins to an officer with Peter’s experience and I’d like to extend my congratulations to him on being appointed.

“With the support of a highly committed team, Peter will build on the great work that has already been carried out and continue to develop and improve the service we provide.”