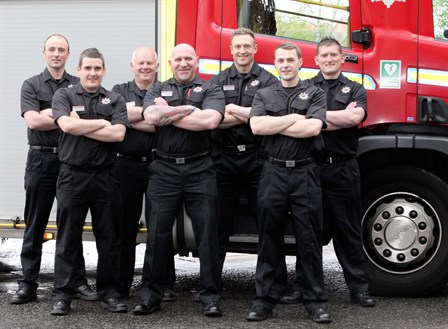 *picture above courtesy of the Daily Record

The Scottish Fire and Rescue Service and Police Scotland are going to war - to raise money for the vulnerable and the elderly.

The emergency service partners work closely together on a daily basis in order to keep communities across Scotland safe from harm.

But, for once, they will stand on opposite sides at a tug-o-war match to be staged at the West Lothian Highlands Games on Saturday, 28 May at 2pm.

And it is hoped the fun sporting epic will raise money for the Cyrenians who support the elderly and the vulnerable.

The event was organised thanks to the efforts of firefighter Scott White.

He said: "It will be fun and friendly and we hope to have the full support of our communities.

"However, I should point out that the Scottish Fire and Rescue Service are experts in rope rescue - so Police Scotland could have their work cut out!”

Scott, 44, is a martial arts teacher based at the SFRS station in Bathgate as a retained firefighter.

He came up with the charity fundraiser after carrying out a Home Fire Safety Visit at the home of a vulnerable member of the community.

Dedicated Scott checked and installed smoke detectors and provided safety advice but felt that the resident was in need of further assistance.

He said: "The Fire Service supports vulnerable members of the community through the provision of Home Fire Safety Visits which helps to keep them safe.

"But I wanted to do more and, after initial inquiries, I learned about the Cyrenians charity. The work they do in supporting people to transform their lives is incredible.

"I thought it would be good to help them continue that work through a charity event.

"Firefighters have to be fit and healthy in order to protect the public and so do our Police Scotland partners so it was natural to invite them to compete in this tug-o-war event. We are very grateful to the West Lothian Highlands Games for their support."

*picture below courtesy of the Daily Record 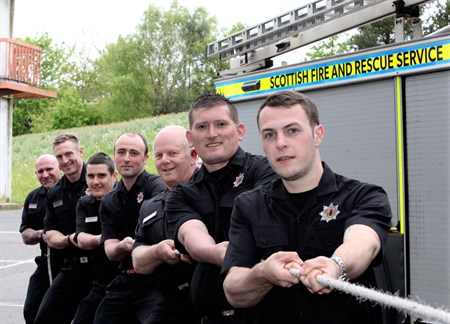 Constable Chas Ferns of Police Scotland said: "We routinely work side by side with our colleagues in the Scottish Fire and Rescue Service to provide emergency support for our communities.

"So we are really delighted to throw our weight behind this charity event and help them raise some cash for a worthy cause.

"They need to remember though - we're not called the 'strong arm of the law' for nothing!"

A charity spokesman said: “Cyrenians would like to thank Police Scotland and the Scottish Fire and Rescue Service for promoting us as beneficiaries of this - sure to be closely-contested - tug-o-war event, and would like to thank them for their own efforts throughout Scotland's communities.

"Cyrenians have two very active services in West Lothian. Our befriending service helps older people who may find themselves isolated and alone and assists them in regaining some independence by re-connecting with their local community.

"The service is currently in urgent need of volunteers.

Alex Linkston is chairman of the West Lothian Highlands Games, staged at Meadow Park in Bathgate.

A fire engine will be there and children and parents can speak to the firefighters.

Alex said: "We are delighted that the Scottish Fire and Rescue Service and Police Scotland are staging this contest at our Highland Games.

"We always seek to support our emergency services and our charities wherever possible.

"I wish both teams the very best of luck and I encourage everyone to assist the charity effort on behalf of the Cyrenians so that they can continue their valuable work.”

The Scottish Fire and Rescue Service team are:

The Police Scotland team are: