Six fire appliances attended the incident in the High Street. 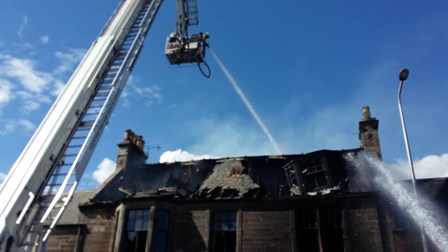 Firefighters responded to a building fire in Elie, Fife this morning (20 May)

On arrival crews found a well-developed fire within a multi occupied property in the High Street.

An additional crew from Glenrothes was quickly requested along with the aerial rescue appliance from Kirkcaldy fire station after the fire broke through to the roof area.

Firefighters fought the fire from outside the building using high pressure water jets due to a partial collapse of the roof.

Group Manager Steven Michie, who was in charge at the scene said: “This was a well-developed fire that had spread to the roof space.

“Through the efforts of the firefighters the fire was successfully contained to the building and although there has been significant damage, the adjoining properties were protected.”