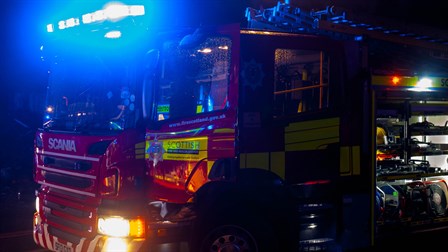 Firefighters rescued two people from a blaze at a flat in Wishaw early this morning (Tuesday 24 May).

Scottish Fire and Rescue Service (SFRS) crews were sent to the incident at Caledonian Road in response to a call from police made shortly after 1:35am.

They led a man and a woman to safety and confirmed no-one remained inside.

A second man had already jumped from the first-floor property prior to the arrival of emergency services and firefighters provided all three casualties with treatment for the effects of breathing in smoke.

The arrival of the ambulance service saw them passed to the care of paramedics before being taken to Wishaw Hospital.

SFRS personnel remained at the scene until around 4:40am.

The short visits allow firefighters to share their advice with residents, helping them take small steps that are known to have a big impact.

As well as making fires less likely to happen they also help keep people safe if one does start, buying vital time for people to get to safety and for help to arrive.

SFRS particularly wants to hear from those who think they – or someone they know – could be at increased risk of experiencing a fire.

Firefighters conducting a free home fire safety visit check to ensure the property is adequately protected by fire detection systems and even install free smoke alarms where these are found to be needed.