Firefighters achieve big falls in fires and casualties in Moray 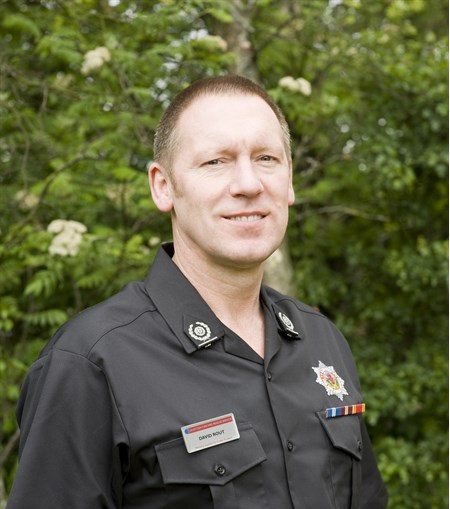 Above: LSO David Rout hailed partnership efforts to reach those at highest risk.

Scottish Fire and Rescue Service (SFRS) personnel also delivered a massive increase in the number of home fire safety visits and the Local Senior Officer (LSO) for Moray and Aberdeenshire praised his firefighters and their partner agencies for their efforts to protect the public.

LSO David Rout confirmed work would continue to build on and entrench the success throughout the year ahead.

After delivering his annual report to members of the council’s police and fire services committee, he said: “I am delighted by the excellent achievements highlighted in this report.

“Driving down the number of fires and the casualties they cause is always a challenge but we are seeing strong downward trends thanks to the determination and professionalism of both our officers and colleagues in other agencies.”

He continued: “A great example of these strong partnerships paying off is in the delivery of home fire safety visits.

“Over the past year firefighters delivered a 32 per cent increase in the number we have carried out and the vast majority of these were targeted to protect people who are most vulnerable to fire or harm in the home.

“This reflects both firefighters’ work to reach those who need our help most and the excellent support we receive from housing and social care professionals.”

The number of deliberate fires in Moray during the 2015/16 financial year was 21 per cent below the average for the previous three years while accidental house fires also fell by over a fifth, from 59 to 47.

It is the second successive year in which SFRS has achieved five-year lows in both types of incident.

Fire-related casualties fell by more than two-fifths as the number of home fire safety visits increased by a third, demonstrating the value of crews being put in touch with potentially vulnerable members of the community.

SFRS crews visited 917 homes in Moray during the 12 months – up 286 from the 631 carried out three years previous.

Free home fire safety visits are available by calling 0800 073 1999, texting ‘FIRE’ to 80800, filling in a form at www.firescotland.gov.uk or by calling your local fire station.

The number of road traffic collisions also fell by a quarter from 48 to 36, with crews taking part in initiatives to reach young drivers and their passengers to raise awareness of dangers when they get behind the wheel.

LSO Rout added: “We want to hear from anyone who thinks they or someone they know could be at risk from fire.

“It doesn’t take long for our crews to visit a home, share their advice and make sure everyone in the property would get early warning if a fire did start.

“We also want people to come forward if they think they could serve as a firefighter on the retained duty system.

“We’ve had great support from some elected members in promoting the role in specific areas and I want to remind people that this is a great way to serve their community, learn lifelong skills and make a very real difference.”

SFRS is currently recruiting RDS firefighters for stations throughout Scotland and anyone who is interested in providing this vital emergency service is encouraged to apply.

The recruitment campaign ends on 22 May and the list of SFRS vacancies can be found on the myjobscotland website.

Anyone interested in applying can get more information by speaking to someone at their local fire station or visiting the official SFRS website: www.firescotland.gov.uk/work-with-us/join-us-as-a-retained-firefighter.aspx.