Around 40 firefighters were involved at the height of the incident 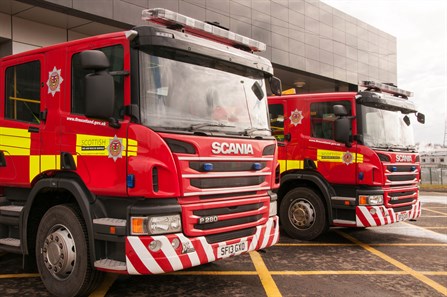 Firefighters extinguished a fire and confirmed everyone was accounted for after reports of an explosion at a flat in West Dunbartonshire.

Scottish Fire and Rescue Service (SFRS) crews were sent to Burn Street Lane in Bonhill shortly after 2:40pm on Friday (27 May) following the first of several 999 calls.

First responders from Dumbarton and Balloch were joined by others from Clydebank, Easterhouse and Kilmarnock as officers called-in specialist resources to assist the operation.

Firefighters used high pressure jets to tackle the flames with teams in breathing apparatus working inside the two-storey building while others operated from strategic positions outside.

At the height of the incident SFRS had around 40 personnel working at the scene.

The firefighters included specialist urban search and rescue teams, who confirmed no-one remained inside part of the building affected by a partial structural collapse.

Residents were evacuated from nearby properties and two men were taken to hospital.

Crews continued dampening down operations through the early hours of Saturday (28 May) and officers from the specialist SFRS Fire Investigation Unit attended the scene.

They will work with their Police Scotland colleagues to establish the circumstances surrounding the incident.