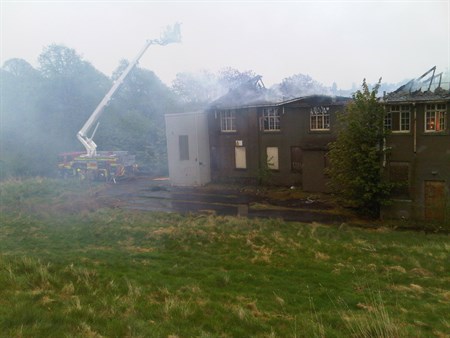 Firefighters were called to respond to a fire at a derelict building at the site of the former Strathmartine Hospital in Dundee last night (17 May).

Scottish Fire and Rescue Service (SFRS) crews from Macalpine Road fire station were sent initially to the incident in response to a 999 call made at 7:09pm, with first responders on-scene four minutes later. Additional crews from Blackness Road and Kingsway fire stations were then requested.

The fire involved the whole of the roof space and resulted in considerable damage to the derelict building.

The SFRS teams used a thermal imaging camera to confirm there was no hidden fire spread within the building’s structure and left the scene around 10:15pm.

Station Manager Fraser Scott said: “I would like to reiterate that members of the public should not enter derelict premises.  They are not only extremely dangerous for those who enter them, but also for the fire crews who are called to respond to fires within them. These buildings may be structurally unsafe, there may be trip and fall hazards and often there is broken glass and other debris lying around.”