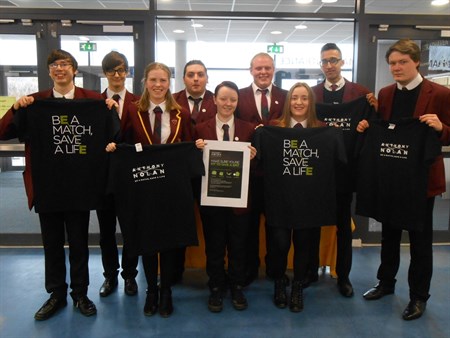 A senior firefighter has praised more than 80 young people who recently showed their commitment to helping save lives.

A total of 84 students signed up to the bone marrow register at Strathaven Academy, Lanarkshire on Tuesday, 23 February.

The event was organised through the award-winning partnership between the Scottish Fire and Rescue Service and the UK's leading blood cancer charity Anthony Nolan.

SFRS Station Manager Eddie Kelly said: “The response from the school team and pupils was fantastic and I’m delighted to report that another 84 young people were added to the bone marrow register.

“This was the second time we have delivered our presentation to the academy and, once again, we were very impressed with the pupils and teachers. They have really driven the event - and their enthusiasm and passion for helping others was apparent for all to see.”

He added: “There are around 37,000 people world-wide desperately in need of a bone marrow transplant and only 30 per cent of those will find a match from within their family.

“For the rest, the hope is that a kind-hearted stranger will put themselves forward to become a donor. But now, after just two events, over 130 pupils from Strathaven Academy have done just that."

The partnership between SFRS and Anthony Nolan was formed eight years ago by Area Manager Ally Boyle and a team of service volunteers when he was diagnosed with a rare form of blood cancer.

Ally has since retired but his work continues.

Since 2008 – through the SFRS and Anthony Nolan partnership - nearly 6,500 people have been recruited to the register with 14 of those going on to donate and potentially save a life.

The initiative is now being rolled out to schools across Scotland.

She said: “We often hear the phrase that ‘children are our future’ but through Anthony Nolan, and the work of the Scottish Fire and Rescue Service, the Strathaven Academy senior pupils may actually help give someone with blood cancer a future.

“We have had tremendous support from Ally Boyle of the Scottish Fire and Rescue Service, Anthony Nolan Partnership.

“From delivering the initial presentation to our senior pupils about the work of Anthony Nolan, supplying information and keeping in close contact with us, helping us plan how best to run our donation event in school, at every stage we have been helped and guided.

“This help contributed greatly to the success of our event and we were delighted that over 80 pupils have joined the register of donors. The response we have had from our young people has been wonderful and they have gained so much from being part of the process.

“We would really encourage other schools to become involved: for a little time and effort you could make such a difference to the lives of others.”

She said: “We selected a group of young pupils to help champion the event and once again I have been hugely impressed to hear of the passionate and enthusiastic way in which they supported the event.

“Staff and pupils at Strathaven Academy can feel very proud of the way in which they have represented themselves and the commitment they have demonstrated to helping others.”

The opportunity to help save lives is available to other secondary schools. Those interested should contact Amy from Anthony Nolan via email at Amy.Bartlett@anthonynolan.org

To find out how you can save a life go to www.anthonynolan.org/sfrs