A retained firefighter who raced to help the public more than 10,000 times during his 40 years’ service has retired.

Family man and business owner Bill Hendry made himself available at a moment’s notice to attend at a range of emergencies in and around Troon, Ayrshire.

He led a crew of firefighters through dense smoke when a major blaze broke out at a block of high rise flats in nearby Irvine in 1999.

Deputy Assistant Chief Officer Paul Connelly is the head of service delivery for the west of Scotland. 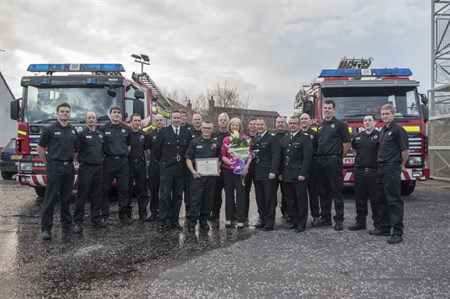 Bill Hendry with wife Marion and, to their right, Deputy Assistant Chief Officer, Paul Connelly, and Local Senior officer, James Scott, and the crew at Troon

He said: “It is inspiring to meet people like you who have served their communities for so many years - because 40 years is an incredible feat.

“We turn up and we help people in their hour of darkest need and, on behalf of all the people you have helped, I would like to say a huge thank you.”

James Scott is the Local Senior Officer for Ayrshire.

He said: “It is a privilege to formally recognise Bill’s 40 years’ service - because it is a rare occasion. 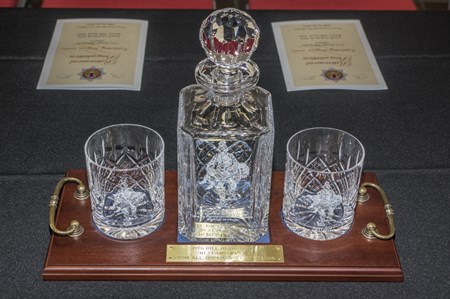 Bill was also presented with a beautiful crystal decanter and glasses

“Bill’s career clearly demonstrates the important role our retained firefighters play in protecting our communities across Scotland. There is no doubt that he and his colleagues over the years have had a major impact on people’s lives.

“I would like to thank you for your service. You have been a stalwart to your station and to your community – and you will be missed.”

Bill was presented with a certificate and brass ‘Breathing Apparatus tally’. Every firefighter who enters a burning building first passes a ‘tally’ to an officer who monitors the amount of air they have remaining in their cylinders.

It is a tradition for this to be passed to firefighters following their retirement as it marks the time they entered and left the service.

Bill, a dad of four and grandfather of four, followed a proud family tradition by becoming a retained firefighter on 23 March, 1976.

Bill served on the front line of many emergencies, including leading a crew into the 14-storey block of flats in Irvine as flames engulfed the nine upper floors on June 11, 1999 which resulted in the death of a man. Firefighters rescued five people.

Bill said: “I have had the privilege to serve these last 40 years with a bunch of brothers who are as professional as they come. Good luck – and stay safe.”

He plans to create a Roll of Service for all the retained firefighters of Troon, past and present. He hopes it will take pride of place at a central location in the town.

To register for a FREE Home Fire Safety Visit call the SFRS Freephone number: 0800 0731 999, or visit the website at www.firescotland.gov.uk where information can also be found on how to become a retained firefighter.