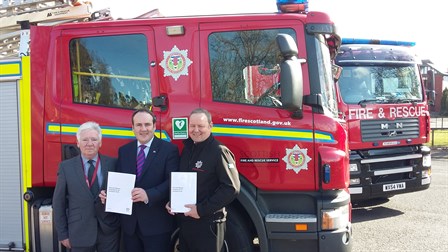 A focus on prevention and improving the safety of communities is at the heart of new plans for the Scottish Fire and Rescue Service (SFRS).

People are being asked for their views on a new Fire Framework which sets out ten priorities for the Service from 2016.

Minister for Community Justice and Legal Affairs, Paul Wheelhouse, launched the Fire Framework at a visit to Hawick Fire Station today where he met firefighters who have received specialised life support training, in partnership with the Scottish Ambulance Service, as part of a pilot programme to reduce the number of people suffering fatal cardiac arrest outside hospital.

Mr Wheelhouse said: ‎“It is fitting that we are launching the framework at Hawick Fire Station today, given the team are a great example of how the service is adapting to new challenges - having been at the sharp end of the flood response in December; being part of the pilot on out of hospital cardiac emergencies; and a whole time team working alongside Retained Duty System teams in neighbouring rural communities.

“Firefighters play a vital role in keeping our communities safe, doing a remarkable job in often challenging circumstances. The number of fires attended in 2014/15 dropped to a ten year low due in large part to their commitment and dedication to prevention and education work in Scotland’s communities.

“The past three years has focused on integrating legacy forces into the nationwide Scottish Fire and Rescue Service, a task which Audit Scotland confirmed has been effectively managed and that had no impact on the public. Now we will be challenging SFRS to look at how it can better deliver its services, working with communities.

“This framework will support SFRS to keep making improvements by promoting the broader safety and well-being of individuals and communities, improving fire safety and promoting fire prevention. We are consulting widely on the draft framework and want to hear from as many people as possible to help shape the document, which will set out the main priorities for the SFRS.”

“The National Framework provides an opportunity to look to ways the Scottish Fire and Rescue Service can play an even greater role in ensuring the safety and wellbeing of our communities. We are already working with partners in health, social care and other blue light services to deploy our capabilities into new preventative and life-saving areas, and the framework encourages us to extend that further.

“We are a national service committed to meeting local needs and hope the public, our partners and local bodies will use the consultation to share their views on the service that they want to see.”

Her Majesty’s Chief Inspector of the SFRS Martyn Emberson QFSM, who was also in at the launch, said, “We welcome the consultation on the new National Framework for the SFRS.  This document sets out what is expected of the fire service during the next phase of its transformational journey. This includes deeper partnership working between the emergency services, like the expansion of the service’s emergency medical response capability, which saves lives in the community.  We would like to encourage everyone to respond to this consultation and express their views on the strategic direction of the service for the future.”