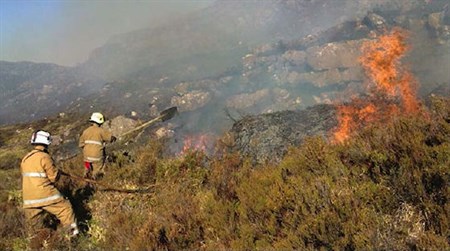 Firefighters tackled a blaze involving around 70 acres of grass and heather in Shetland this afternoon (Thursday 17 March).

Scottish Fire and Rescue Service (SFRS) crews used beaters to knock down the flames and successfully bring under control the incident near the Mousavord Loch at Sandness.

Group Manager Myles Murray, the incident commander, said: “This was an extremely challenging wildfire involving a large area and the crews did a truly excellent job to extinguish it.

“Wildfires are inherently unpredictable and we knew that if the wind changed direction the flames could threaten power lines supplying electricity to our communities, which would obviously have a very serious impact on homes and businesses.

“We also know that wildfires damage the local environment and have devastating effects on wildlife so it is important to bring them under control quickly.

“Our crews had to operate in arduous conditions and it was a physically demanding operation, but their skill and professionalism ensured this fire was successfully extinguished before the power supply was threatened and more environmental damage done.”

Four appliances were involved in the operation, with the first sent from Lerwick in response to an emergency call made shortly before 12:50pm.

It was joined at the scene by others from Walls, Scalloway and Lerwick after the incident commander requested additional crews to help extinguish the fire before it could escalate.

Crews had brought the fire under control by 2:40pm and fire cover was maintained for the rest of the island throughout the incident.

SFRS is appealing to everyone in the countryside to pay close attention to wildfire danger warnings as weather forecasters predict dry and windy conditions in the coming days.

A high pressure system is dominating the UK’s weather and this has historically been linked to elevated wildfire behaviour at this time of year.

Whilst no specific wildfire warnings are in place forecasters have advised that the situation, which has the potential to bring dry continental air to Scotland, is likely to persist for the coming week.

Many wildfires are started deliberately or are due to careless, reckless or irresponsible behaviour.

Anyone who sees someone acting suspiciously, recklessly or irresponsibly in the countryside should contact Police Scotland on 101 or pass information anonymously to Scotland Crimestoppers on 0800 555 111.