SFRS officers take part in a memorial service at the Glasgow Necropolis for the 19 firefighters who lost their lives. 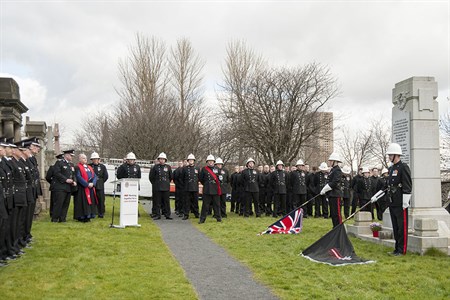 Above: SFRS officers stand in memory of the 19 firefighters killed at Cheapside Street.

Scottish Fire and Rescue Service (SFRS) officers have marked the anniversary of the Cheapside Street disaster that claimed the lives of 19 firefighters in Glasgow. 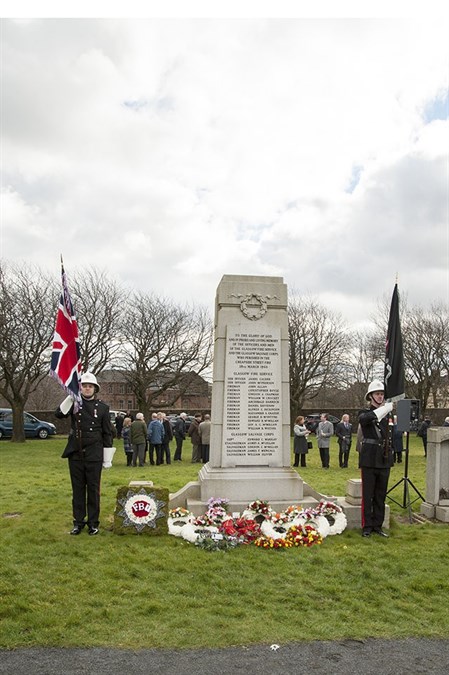 Above: Wreaths were laid at the Cheapside Memorial in the Glasgow Necropolis.

A memorial service was held at the city’s Necropolis this morning (Wednesday 30 March) to remember those who were killed in what remains the largest peacetime loss of life ever suffered by Britain’s fire and rescue services.

On the evening of 28 March 1960 a blaze tore through a whisky bond with an explosion sending its 20-metre-high (60ft) walls crashing to the street below.

Fourteen Glasgow Fire Service and five Glasgow Salvage Corps members perished as they worked to protect the public from the inferno.

Chief Officer Alasdair Hay, the head of today’s SFRS, told those gathered at the memorial: “It is a privilege to be here to remember each of the 19 brave men who tragically lost their lives.

“Many of us are paying tribute to each of them as a professional firefighter and colleague but they were also fathers, husbands, brothers and sons.

“While time may heal the sense of loss, memories last a lifetime and I know that today will sharpen those memories for everyone who knew and loved them." 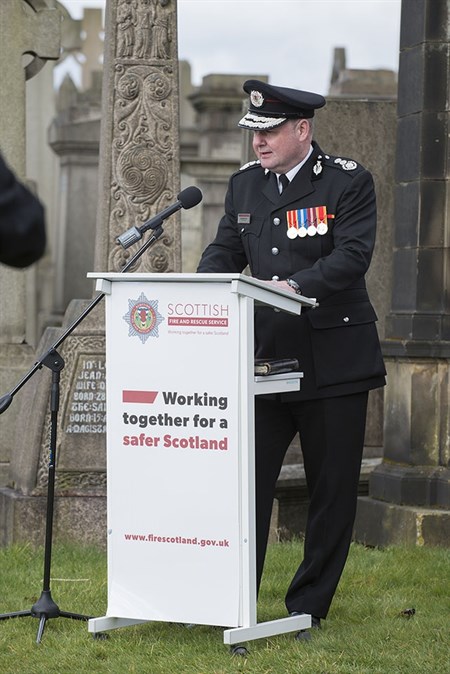 Above: Chief Officer Alasdair Hay paid tribute to those killed in the line of duty.

Chief Officer Alasdair Hay added: “As career firefighters we know that every day men and women in fire and rescue services around the world risk their own lives to save the lives of others.

“Bravery and selfless devotion are inherent in every firefighter – it’s what drives them to join the service and commit, without question, to environments that many people could never even imagine. This tragedy was such an environment.

“At its height 450 firefighters fought the blaze. Only minutes earlier it had taken the lives of 19 of their colleagues, but they fought on without question.

“Cheapside Street, Kilbirnie Street, Dudgeons Wharf in London, Zephaniah Way in Gwent, Gilinder Street in London and Balmoral Bar in Edinburgh among the incidents that serve to always remind us of the risks our crews take each time they deploy."

He continued: “Our past helps to shape who we are and who we want to be. And I am proud to say that the spirit and bravery of those firefighters lives on in those serving in our service today.

“The sacrifice made by the 19 men fighting the Cheapside Street fire will always be remembered – they are a proud part of our history and our thoughts will always be with them and their families." 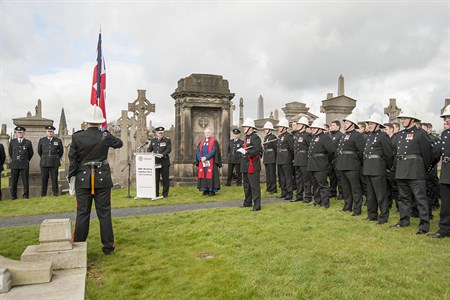 Above: SFRS officers stand in memory of the 19 firefighters killed at Cheapside Street. 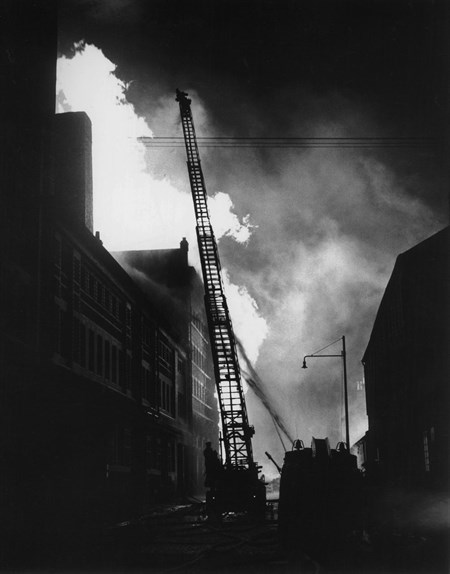 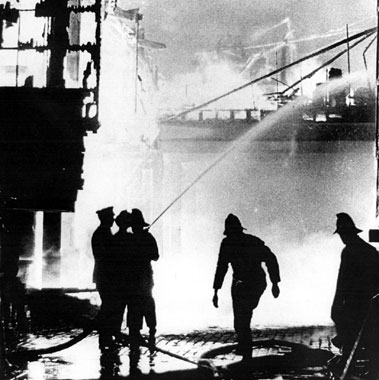 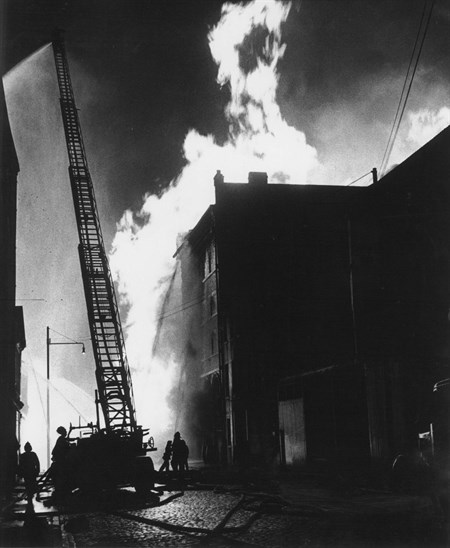 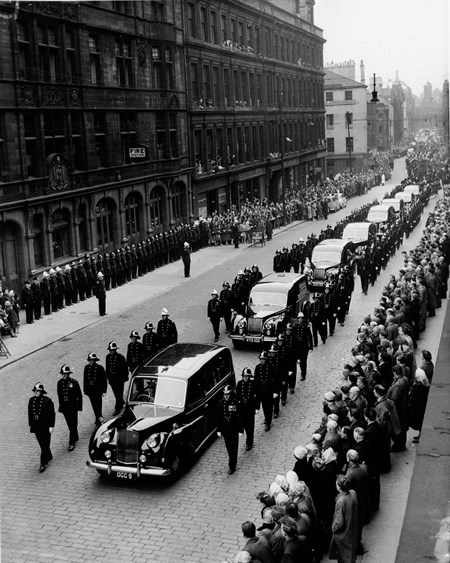 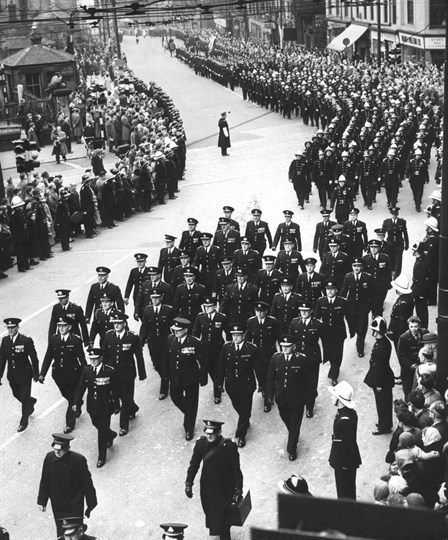 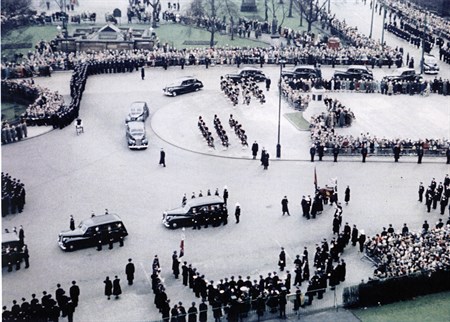 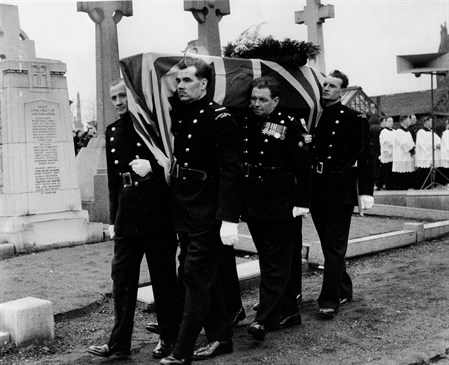 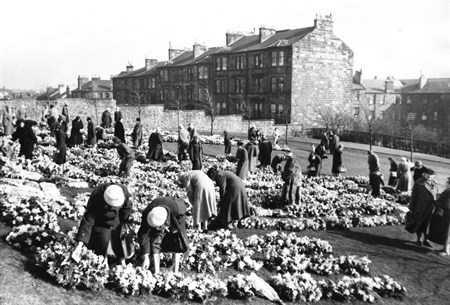 Above: Women laid flowers for the fallen firefighters after the tragedy in 1960.