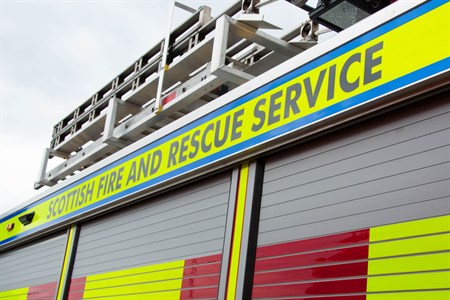 A Dundee fire officer has stressed the importance of fire safety within common closes or stairwells after a fire in a city tenement last night.

Crews from Blackness Road and Kingsway East were called to a fire in the stairwell of a block in Dundee’s St Andrew’s Street at 9.39pm (3 March 2016).

When firefighters arrived a family of three had managed to self-evacuate and their son was treated by paramedics for slight smoke inhalation.

Another man was walked out of the tenement by crews who had extinguished the fire and he complained of feeling unwell before being treated by paramedics.

The Aerial Rescue Platform was used to rescue three men from the roof after they had made their way there from top floor flats. Operations control gave fire survival guidance to a number of occupants in the tenement.

There was fire and smoke damaged to the stairwell, electrics and lighting.

Scottish and Southern Energy attended to ensure the electricity in the tenement was still safe and to check to see if the stair lighting could be repaired, which unfortunately it couldn’t.

Dundee Station Manager Craig Thomson said: “We don’t believe this fire was started deliberately but caused by the careless disposal of a cigarette. It is important to ensure smoking materials are properly extinguished before leaving the area, particularly if there are combustible materials nearby.

“We would urge people not to leave rubbish or bins in the common stairwells of tenement blocks for a number of reasons. It can be very attractive to fire setters and increases the risk of a fire. Discarded items of furniture and rubbish can produce large amounts of toxic smoke and also impede access for emergency responders.

“You can reduce the risk of fire for yourself and your neighbours by keeping common stairs clear and free from obstruction and making sure main doors are kept locked.  Steps should be taken to ensure the door entry/intercom system is working.”

“If you know someone who can benefit from our service, why not get them to give us a call? It is important that you know what to do if a fire does occur in the stairwell and how to keep safe. We can advise on this as part of the visit.

“If you or someone you know could benefit from a visit, please  join Scotland’s fight against fire and request a visit by calling the SFRS free phone number 0800 0731 999.”