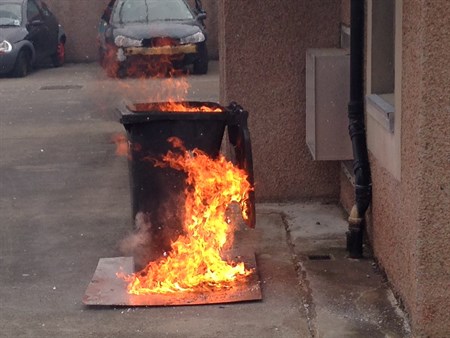 Firefighter’s work in the community has paid off in South Lanarkshire and led to a significant decrease in the number of deliberate fire incidents across the area, latest figures show.

Of the 31 deliberate primary fires during that period, ten involved road vehicles, four were domestic garages and seven were incidents of people setting fire to property.
Area manager Alan Fairbairn presented the figures to members of the Safer South Lanarkshire Board (SSLB) at a scrutiny meeting earlier this week. He attributes the falling numbers to the strength in community outreach programmes, particularly towards young people in the area.

Alan said: “Deliberate fires are an unnecessary burden on SFRS resources and keep our crews away from more serious emergencies.

“Many of these incidents involve young people and intervention work is regularly undertaken by our community partners to engage with schoolchildren and encourage fire safety.
“Working from the Community Safety Hub, SFRS and Police Scotland have been able to quickly address any escalation in anti-social behaviour and tackle the issue of deliberate fires head on.

“By working closely alongside emergency service colleagues and our community safety analyst, we will continue to drive down instances of deliberate fires by looking at innovative ways to tackle this type of anti-social behaviour.”

Accidental house fires remained relatively static towards the end of 2015 but figures continue to highlight the dangers of cooking whilst under the influence of alcohol.

Of such 72 fires recorded in South Lanarkshire in the three months preceding New Year, the majority were caused by cooking and in 13 cases alcohol was suspected to be a contributory factor with people becoming distracted or falling asleep.

Tragically, three fire fatalities were recorded in South Lanarkshire over the past nine months – two due to smoking materials and one to cooking. Work continues to identify those at risk of fire within the community and prevent such tragedies occurring in the future.

Station Manager Fairbairn added: “We continue to see instances of people accidentally causing fire when cooking and – in one case during the last nine months – this has sadly resulted in a fatality.

“Fires start when your attention stops and it is important that people take care when preparing food.

“If you’re tired, have been drinking, or taking drugs, you will be less alert to the signs of fire. You are less likely to wake up if a fire does start, particularly if you don’t have working smoke alarms in your home.”

Scottish Fire and Rescue Service works closely with partner agencies and communities to reduce the number of accidental house fires through the delivery of targeted Home Fire Safety Visits (HFSV) and the installation of free smoke alarms.