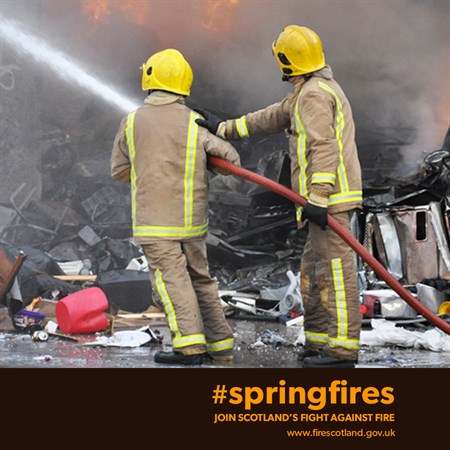 Firefighters in Inverclyde have reiterated the Scottish Fire and Rescue Service’s spring safety messages after a spate of deliberate fires in Port Glasgow on Monday night (7 March) almost resulted in tragic consequences.

At around 6.30pm operations control in Johnstone received a 999 call from a woman reporting a waste paper bin fire at her ground-floor flat on Grampian Road.

Two appliances from the nearest fire station, Port Glasgow, were already dealing with a bush fire next to St Stephen’s High School and crews had also been in attendance at refuse fires on Marloch Avenue and Millport Road within a very short period of time.

With resources stretched to the max, our crews had to quickly re-organise and mobilise vehicles to the more serious incident on Grampian Road, less than a kilometre away.

By the time firefighters arrived the occupier had managed to extinguish the fire herself, but had suffered burns carrying the bin outside and was later taken to Inverclyde Royal Hospital for treatment.

Remarkably, Port Glasgow firefighters were called to yet ANOTHER suspected malicious fire less than an hour later when rubbish was set alight at Highholm Avenue.

“This combination of secondary fires placed an unnecessary strain on local resources and we must be thankful that no-one was more seriously injured. Next time we may not be so fortunate.”

Inspector Damien Kane, from Police Scotland’s Community Policing Team in Greenock added: "The deliberate setting of fires can lead to the loss of life and may incur long custodial sentences for the person responsible.

"Maliciously setting a fire, even where the intention is not to harm anyone, takes the emergency services away from responding to incidents where the lives of others may be at risk."

He said: “Deliberate fire raising can endanger lives and divert crews away from dealing with other incidents. Thankfully on this occasion no-one was seriously injured, but it doesn’t take much to see that things could have gone very badly wrong very quickly. I’d urge anyone with information on incidents of deliberate fire raising to report it immediately.”

There are a number of things we can all do to make these incidents less likely. Be aware of strangers loitering in your street and contact Police Scotland on 101 with any information you may have on those who deliberately set fires.

We know that the majority of our young people are responsible law-abiding citizens but it’s important they are all fully aware of the risks of playing with fire. Ensure you know where the children or young people you look after are – and what they’re doing.

Rubbish can attract those who wish to set deliberate fires. Report fly-tipping directly to your local authority or to the National Dumb Dumpers Stop line on 0845 230 40 90.

For more information on our spring safety campaign and ways you can join Scotland’s fight against fire – search for #springfires on social media or visit our special spring safety page.