Firefighters from Cowcaddens and Springburn dispatched to fire on Aberfoyle Street 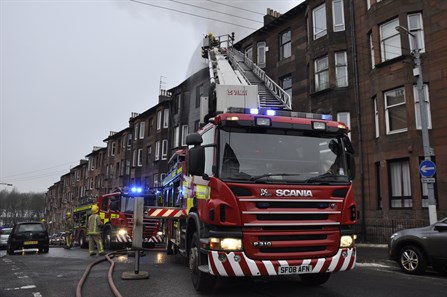 The Scottish Fire and Rescue Service remain at the scene of a tenement fire in the east end of Glasgow which broke out early this morning (17 March).

At approximately 6:20 am local crews from Cowcaddens and Springburn were dispatched to a fire in the top floor flat of a four storey tenement at Aberfoyle Street in the east end of Glasgow.

On arrival the Incident Commander quickly assessed the situation and deployed his crews in breathing apparatus to tackle the fire with water hoses and also carry out a search of the building for any residents who may still be within. Additional crews were requested from Calton and Easterhouse to assist with the well developing fire.

A high reach appliance was set up to tackle the fire from above and also protect surrounding properties.

One male casualty suffering from smoke inhalation has been taken to Glasgow Royal Infirmary for treatment.

The fire is now under control but firefighters remain at the scene to dampen down hot spots and ensure the protection of surrounding properties. The cause of the fire is yet unknown and Police Scotland are working to minimise the impact of the fire on the local road network