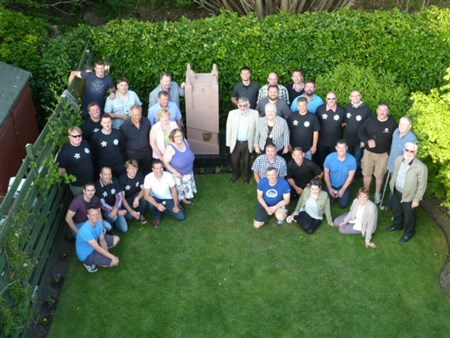 Note: The picture shows Provost Liz Grant with those that attended the Civic Reception next to the 'Twinning Stone' which was made in Aschaffenburg and transported to Perth by firefighters from both cities in 2006 to commemorate the 50th anniversary of these strong links.

Firefighters from Perth's twin city of Aschaffenburg in Bavaria were delighted with their first visit to the city.

The German firefighters enjoyed a five-day visit to the Fair City as the guests of their Perth counterparts.

The 15-strong group’s visit included a drop-in at the Scottish Fire and Rescue Service's national HQ and state-of-the-art training centre in Cambuslang, where they were shown several displays of firefighting and rescue skills and exchanged ideas with their hosts.

There were also trips to Glasgow's Merchant City, Fife, Dundee, Edinburgh and a tour of the Highlands.

The firefighters were treated to a Civic Reception BBQ hosted by Provost Liz Grant in the Memorial Garden at Perth Community Fire Station, which was attended by local firefighters, members of the Community Safety Committee and Friends of Aschaffenburg Association.

Provost Liz Grant said: “The bond between our firefighters in Perth and their counterparts in Aschaffenburg is an excellent example of how we can share friendship, strengthen links and learn from each other across the world from our twinning partnerships.

This was the first part of an exchange visit, with firefighters from Perth forming part of a wider group from Perth & Kinross Council and the Friends of Aschaffenburg who will be in the Bavarian City from the 24th - 29th June, to celebrate the 60th anniversary of their twinning partnership.

Rab Middlemiss, SFRS group manager for the Perth & Kinross area, said: "This was a great way for us to start the celebrations and build on the friendships that have formed between our firefighters over many years and previous exchange visits.

“There is natural comradeship between firefighters and we continue to learn from each others experiences in our respective countries.

“They had a great time and our colleagues from Aschaffenburg said they were shown the best of Scottish hospitality during their stay."