And the majority of those fires were deliberate and reckless – putting pressure on firefighters when genuine emergencies arose and placing lives at risk.

Assistant Chief Officer Robert Scott is the SFRS Director of Prevention and Protection.

He spoke out ahead of summer 2016 to warn that firefighters will work closely with our colleagues in Police Scotland to identify those responsible for deliberately setting fires.

The ACO also appealed to parents, carers and young people to Join Scotland’s fight against fire as the school holidays kick off – a traditionally busy time of year for firefighters.

He said: “The Scottish Fire and Rescue Service has a zero tolerance approach to deliberate fire raising because it puts our communities at great risk.

“We will continue to work very closely with our police and local authority partners to ensure that those responsible are identified and dealt with accordingly.

“Deliberate fires, in particular at areas of grassland and refuse, waste our time and resources and have the potential to delay us from reaching real emergencies - where every single minute counts.”

He added: “It absolutely goes without saying that we prefer to prevent fires – not fight fires.

“As a result, our firefighters work extremely hard to engage with the public and promote safety messages in order to keep our communities as safe as possible.

“We would ask parents and carers to help us also by discussing summer fire safety with young people.  Together we can work towards a fire free summer.”

SFRS is urging those with information about any deliberate fires at buildings, grassland and areas of refuse to report it straightaway.

ACO Scott added: “Every deliberate fire has victims, costs - and consequences. We need our communities to work with us in helping stamp out this reckless behaviour.”

Anyone with information about deliberate fire-raising should contact the free and confidential Crimestoppers helpline on 0800 555 111.

Meanwhile, members of the public can also flag up any illegal rubbish dumps at www.dumbdumpers.org / or by calling 08452 30 40 90.

Not all fires are deliberate with others linked to barbeques and camping. There are, on average, almost 100 caravan fires in Scotland every year.

ACO Scott said:  “A fire in a caravan or mobile home can be devastating as it can spread much more quickly than it would in a house or flat.

“We want holidaymakers to take extra care and think about fire safety when they are away from home.  We cannot stress enough the importance of working smoke alarms in a caravan.”

Here are some top safety tips: 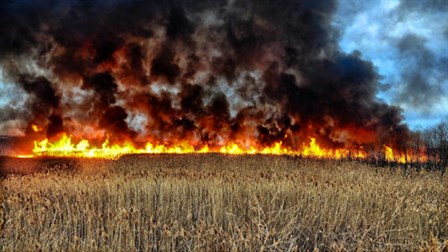