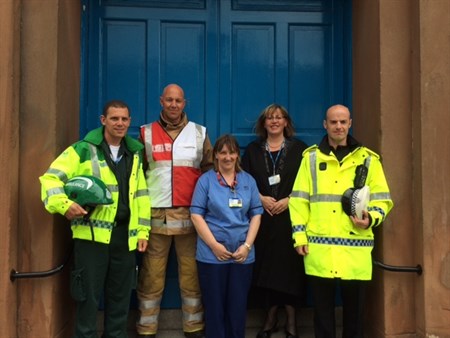 Representatives of the Scottish Ambulance Service, the Scottish Fire and Rescue Service, NHS Dumfries and Galloway, the Crown Office and Procurator Fiscal Service, and Police Scotland at a Safe Drive Stay Alive event.

Firefighters in Dumfries and Galloway helped make young people aware of dangers on the roads.

More than 800 youngsters from schools across the west of the region were given a vivid picture of the carnage that follows serious collisions.

Emergency responders left no-one in any doubt of the horrors they face at the scene of crashes.

Watch Manager Jason Gardiner, SFRS community safety officer, made clear the importance of getting the message across.

He explained: “Too many young people are unaware how easily a driver can lose control and how terrible the consequences can be.

“The people in this age group are likely to be learning to drive, to have recently passed their test or to be in the car with a new driver.

“Sadly, the professionals involved in Safe Drive Stay Alive have all seen first-hand the awful results of something going wrong.

“By sharing our experience of needless tragedies with young people we can make them consider their actions so they can choose never to put themselves or others at risk.”

In highlighting the consequences of dangerous driving, the hard hitting events revealed how serious collisions impact the emergency services as well as the friends, families and communities of those involved.

Firefighters and paramedics spoke about the complex and often traumatic task of rescuing trapped casualties.

Their graphic accounts detailed how they work side-by-side to keep seriously injured people alive and cut them from their mangled vehicles.

A Police Scotland traffic officer spoke of the personal impact when they attend a crash and how they approach informing the next of kin, explaining to the youngsters how families react when told a loved one has been killed.

An A&E nurse explained how teams of medical doctors, nurses and surgeons come together to save casualties’ lives once they reach hospital.

They also conveyed the sorrow of speaking to bereaved families when all efforts fail and a casualty loses their life.

The procurator fiscal also spoke about the steps taken to hold to account those who are responsible for serious injuries and deaths on the roads and the consequences for those found guilty of dangerous driving.

Watch Manager Gardiner added: “Hearing these stories has to make us all think about our actions when we are behind the wheel.

“Possibly the most powerful and lasting impression was from someone whose family has been struck by tragedy.

“The sessions closed with the father of a casualty speaking emotionally about how the injuries his son sustained have impacted on their family.

“He revealed that despite three years of intense treatment and recovery, the collision ultimately left his son in a wheelchair and totally dependent on others for the rest of his life."