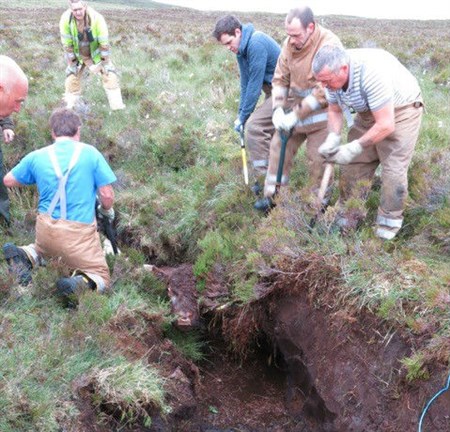 A one-tonne bull that fell into a muddy storm drain while out looking for cows had to be rescued by firefighters.

The prized £2,000 animal had been roaming Ben Aketil windfarm on the Isle of Skye when it tumbled three feet in a remote area of peatland.

The exhausted and very hungry bovine was discovered 48 hours later by a crofter who spotted its head - and immediately called in the Fire Service for help.

Firefighters from Portree, Broadford and Dunvegan were mobilised to the scene.

Farm animals are important to the economy and firefighters are highly-skilled in large animal rescue which can require technical expertise.

The 15-strong crew assessed the situation and then weighed in with pitchforks and spades to help free the stricken bull. 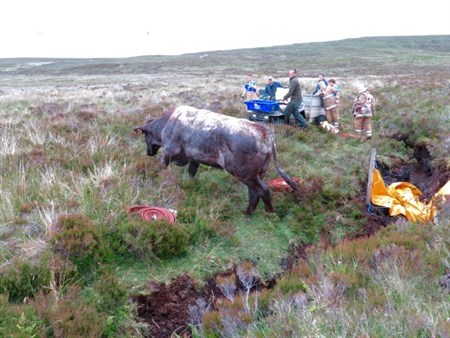 Firefighter at Broadford fire station Martin Benson said: “The bull had been stuck for a considerable amount of time and had lost a lot of weight.

“We cut the peat bank as best we could around the bull which was about three feet below ground level - and stuck at either side when we arrived.

“Eventually we managed to carve out some room for the bull to wriggle itself free.”

He added: “The first thing the animal did was shake itself down and go for something to eat!

“In such a remote, agricultural area these rescues are sometimes necessary - and it’s nice to have a happy outcome.”

He said: “He disappeared on the Friday while searching for cows.

“It’s not uncommon for a bull to go missing in such a large area but this bull had never gone missing for such a time before.

“When we found the animal I was surprised at how far he’d travelled.

“I called the Fire Service right away and they did a magnificent job of digging him out.”

Ian added: “He’s been eating a lot more - but apart from that he’s looking okay!”