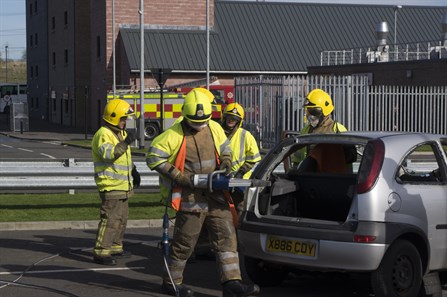 * Please note, the image above is of a training exercise.

Firefighters rescued two women from cars after a crash in Renfrewshire.

Both casualties were freed from their vehicles after crews used hydraulic cutting gear to create the space needed to safely lift them clear.

The incident happened in Erskine’s Newshot Drive around 7:40pm on Wednesday, 13 July.

Scottish Fire and Rescue Service (SFRS) crews were sent in response to an emergency call and arrived to find one woman trapped in each of the vehicles.

Working alongside ambulance personnel, the firefighters lifted both casualties out on rescue boards.

The simultaneous rescue operations involved teams of firefighters assigned to work at each vehicle, with hydraulic cutting equipment used to remove the roof from one of the cars.

A man was also involved in the collision. He had not been trapped and was already in the care of paramedics when firefighters arrived.

All three casualties were taken by ambulance to the Royal Alexandra Hospital in Paisley.

SFRS crews made the scene safe before leaving around 9:10pm.