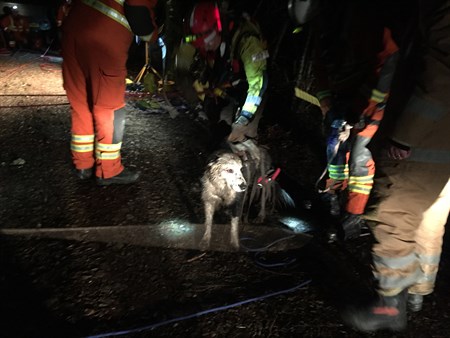 Pic supplied courtesy of The Courier

Scottish Fire and Rescue Service's specialist line rescue and water rescue teams were called out to help rescue a dog which had got itself stuck down a 30m ravine at Blair Atholl yesterday afternoon (27 January 2016).

The dog had gone missing whilst out for a walk with its owner around 1pm and after searching for their pet they eventually located the animal around 4pm down in the ravine and called for help.

Crews from Pitlochry and Aberfeldy were supplemented by specialist water and line rescue teams from Perth and Kingsway East in Dundee.

Station Manager Scott Symon co-ordinated the incident and using their specialist skills and equipment firefighters were able to locate the dog and raise it up to safety. The last appliance left the scene at 7.30pm.

Group Manager Bruce Farquharson, who was at the incident, said: "It was a very challenging situation with a lot of factors to take into account. The river was in spate, it was pitch dark and the animal was located 30m down into the ravine. The crews did an excellent job during what was a complex operation.

"It would have been impossible for the owner to rescue their pet and if they had even attempted it they would have put themself at serious risk. There is a danger that people try to rescue animals themselves and we would then be required to rescue the people."