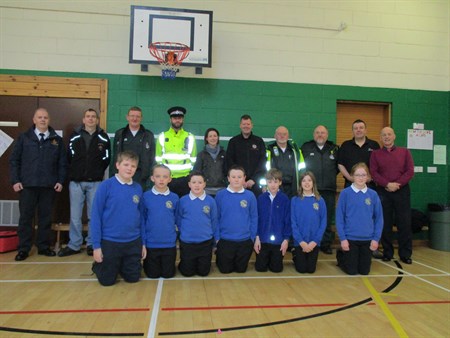 Portree Primary School's 999 Project is a charity which aims to help communities in Moldova, Serbia and Romania and potentially save lives.

Scottish Fire and Rescue Service (SFRS) was approached by the school to support a special 999 Day to raise money for the project and this has been scheduled to take place on 24 March at 10am at Portree Primary School, Isle of Skye.

There will be a bake sale, charity car wash and other events and classes within the school will be taking part in other fundraising activities before and at the 999 Day in order to meet their £2500 target.

Entry to the event will only cost £1 and proceeds will go towards the charity.

A special PPS 999 t-shirt has also been created and will also be on sale to raise money for the charity. The t-shirt can be ordered by contacting the school.

The Lucky2BHere charity has already donated £500 to the cause and the school is also planning a disco the night before the event to extra raise money.

A P7 pupil at Portree Primary School said: "Often people in Moldova, Romania and Serbia have to watch their homes burn down and many are not saved in road traffic accidents because of their lack of modern fire engines and adequately trained crews in their communities.

"By helping support this project you can help save lives by enabling us to provide fire engines, modern equipment and training for crews."

Scottish Fire and Rescue Service Watch Manager at Portree Fire Station, Ian Nicolson, said: "We are delighted to be able to support Portree Primary School in their efforts to raise money for a very worthwhile cause.

"Scottish Fire and Rescue Service is committed to keeping people safe and the aims of this project mirror that.

"Fire and rescue services play an essential role in public safety and prevention. Everyone, no matter where they live, deserves access to a fire and rescue response. We are delighted to be supporting the Primary 7 pupils at Portree and wish them all the very best in their fundraising efforts."