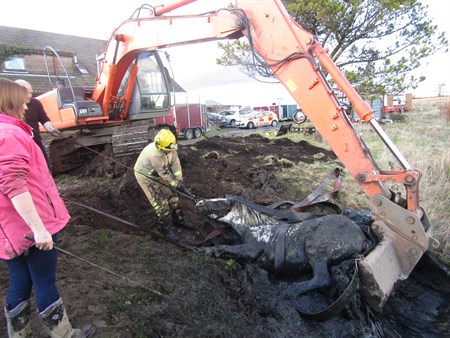 Highly-skilled firefighters teamed up with the farming community this week to battle through challenging conditions and save the life of a horse.

The animal, a female named Flash Dance, was crossing a small bridge when she slipped and fell into a freezing ditch and became stuck.

Despite the efforts of owner Kath Mulholland along with livery owner John McIntyre and his family, Flash Dance was trapped, cold and exhausted.

There were concerns that the horse would have to be euthanized.

But SFRS was alerted and a crew from East Kilbride, Lanarkshire arrived at the town’s Flattmoss Farm around 4pm on Tuesday, 23 February to assist.

Firefighters, skilled in rope rescue and water rescue, worked to free Flash Dance - weighing 440 kilos - from two feet of mud at the bottom of a slope. They used an inflatable air bag to try and raise the horse to her feet but it kept sinking into the soft ground.

Station Manager Eddie Kelly then enlisted the help of a nearby farmer whose JCB digger was used to scoop away six feet of mud - allowing firefighters to get underneath the animal, secure ropes around her body and hoist her clear.

She was tired, cold and dirty but otherwise uninjured.

Station Manager Kelly said: “This was a challenging and time-critical operation. Flash Dance was stuck in deep mud, on a slope, and she was tired, exhausted and very cold.

“We were able to use our specialist rescue skills and equipment to find a solution and, by working with the local farming community, were able to free Flash Dance and reunite her with her owner. The assistance given to us was invaluable.”

Kath, 58, said: “The firefighters would not give up. They were fantastic. I just want to thank them, John and his family, the farmer and everyone else who helped.”

John was involved in the rescue operation along with wife Barbara, 63, daughter Susan, 39, her husband Scott, 42, and daughter Sarah, 29.

Firefighters informed him afterwards about the SFRS Rural Risk Project in South Lanarkshire and Dumfries and Galloway.

There are over 9,000 farms in Scotland and SFRS can respond not only to large animal rescue but building and vehicle fires, road traffic collisions and flooding. Farms are also vulnerable to wilful fire-raising due to their isolated location, open boundaries and readily ignitable hay and straw stacks.

The Rural Risk Project allows farmers to simply fill in a form highlighting any risks on their properties. This helps SFRS crews to make a better informed, tactical response when dealing with any incidents – which can achieve significant reductions in the levels of damage or loss.

John, 65, who owns Flatmoss Farm including livery yard and associated buildings, said: “I think it is a good idea. It means firefighters can be prepared - and they can help keep my property safe. I am certainly going to let others know about it.”

To find out more about the Rural Risk Project, visit: /your-safety/farm-safety.aspx