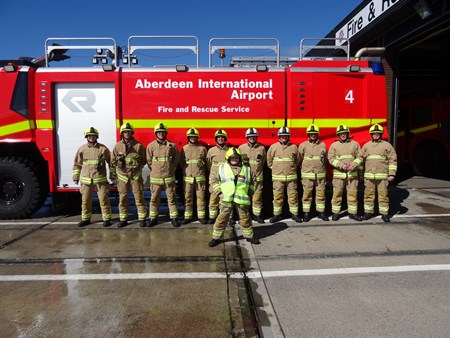 Firefighters have helped a schoolboy come closer to achieving his goal of visiting every fire station in the UK.

This brought the tally of stations he has visited so far to well over 800.

Andrew has autism – and part of his mission is to increase awareness of the condition, and to raise funds for the Fire Fighters Charity.

He has already amassed more than £1600 for the charity through his Just Giving page.

He said:  “We were delighted to support Andrew in helping him achieve his goal.

"His challenge highlights the diversity of work which we carry out as a service and that, along with his fundraising activity is appreciated by all of us.

“I think he is also a very positive role model for other young people with autism by showing what can be achieved and I look forward to hearing how he gets on with the remainder of his challenge.

“We took him to visit four stations in Aberdeen and gave him a demonstration of our all-terrain vehicle in action during a training session at the Gramps.”

Martin Stubbs, Head of Fire Service at Aberdeen International Fire & Rescue Service said:  “Andrew was given a practical demonstration of the capability of the personnel and equipment.

“He was great fun, very enthusiastic and showed a fantastic level of knowledge.

“It would be a great pleasure to welcome back Andrew in the future and hear how he has done.”

In Shetland he spent eight days criss-crossing the islands visiting 13 stations with an additional visit to the station at Fair Isle.

He also viewed a water rescue demonstration at Sumburgh and was taken to visit the RNLI and coastguard at Sullom Voe when he was at Tingwall Airport.

Andrew became fascinated by the fire service after Paul took him to visit three stations in Hampshire on Christmas Eve 2014.

Initially he set himself the target of visiting every station in Hampshire but it wasn’t long before his One Lad’s Challenge grew and he decided he wanted to visit all the stations in England, Scotland, Wales, Ireland, the Isle of Man and the Channel Islands.

So far, Andrew and his family have identified 2355 stations which includes some stations at airports and RAF bases as well as a number of private stations but the list keeps growing.

Mum Kirstine said: “Every time we visit a station, we hear about another private one which isn’t on our list so the total number to visit just keeps growing.

“We set a target of visiting 250 a year but Andrew has already visited more than 800 over the past 18 months so we think we will have another three to four years of visits.

“It all depends on Andrew, if he decides he would like to stop then we’ll stop.

“At the moment though, some evenings, most weekends and all of holidays are spent visiting fire stations, with Paul and me alternating who goes along.

“Andrew has also visited fire stations in Denmark, although they are not included in the UK total.

Two years ago, Andrew could not read or write, had very poor social skills and struggled to communicate with people he didn’t know.

He then transferred to a different mainstream primary school and that, combined with his fire station journey, has made a huge difference in his life.

He can now read and write, has become outgoing and communicates well, particularly with fire fighters and support personnel.

“The Fire Service has been absolutely brilliant in the work they have done to support Andrew and the way they’ve helped bring him out of his shell has just been fantastic,” said Kirstine.

“Every single firefighter he has met has been so accommodating and has gone out of their way to help him. We can’t thank them enough.” 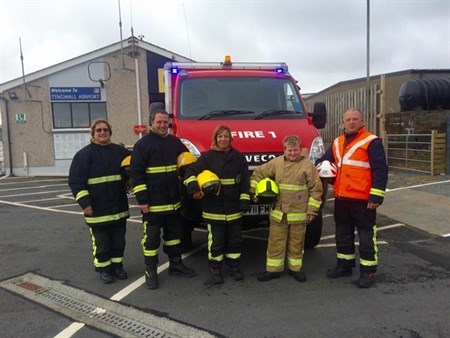