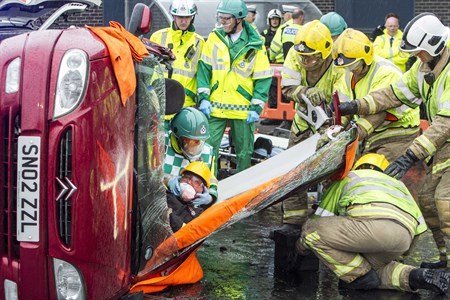 *Please note: The image above is of a training scenario.

Firefighters rescued two people after a crash near Milngavie left a car on its side.

The injured man and woman were freed by Scottish Fire and Rescue Service (SFRS) crews who stabilised the vehicle and cut off its roof.

Ambulance personnel tended to the pair inside their car while firefighters worked to safely release them.

The incident happened on Sunday, 31 July in Balmore Road, Bardowie and two fire engines were scrambled in response to a 999 call made shortly after 8:15pm.

Firefighters reached the scene four minutes later and they used short-extension ladders to prevent the partially-overturned car moving and causing further injury to its occupants.

The crews deployed hydraulic cutting equipment to create space to lift the casualties out.

After being safely released they were taken by ambulance to the Queen Elizabeth University Hospital.

A man and woman from a second car also received attention at the scene of the incident, however they were not trapped as a result of the collision and had been able to safely exit their vehicle.

SFRS crews made the scene safe before leaving around 9:30pm.