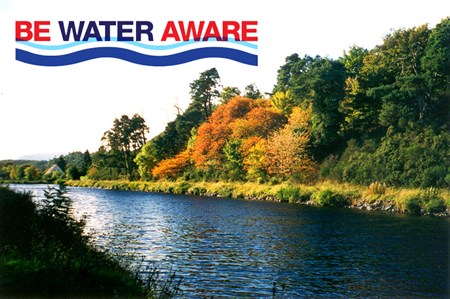 The Scottish Fire and Rescue Service is joining with fire and rescue services across the UK in supporting the Chief Fire Officers Association's (CFOA's) Drowning Prevention and Water Safety Week 2016 which is taking place from 25 April - 1 May.

Trips, falls or underestimating the risks associated with being near water meant that 302 people lost their lives. Adhering to some simple advice can reduce your risk of ending up in the water. By asking people to 'be water aware' fire and rescue services aim to reduce the number of fatalities.

Assistant Chief Officer of Prevention and Protection Robert Scott said: “We are frequently called to incidents where residents, particularly children and young people, get into difficulty when swimming in open water. With the good weather comes the temptation to cool off with a swim in waterways.

“There is no way of knowing what lies beneath the surface of the water. The water may look calm on the surface, but there may still be strong undercurrents that could pull even a strong swimmer under.

“The water may also feel relatively warm on the surface, but just a few feet below can be icy cold even in the hot weather and can very quickly cause severe cramp and hypothermia.

“Young people often misjudge their swimming ability - they may view a river or lake as a tempting means of cooling off during a hot spell of weather, but fail to appreciate the harmful effects that the cold water can have on their stamina and strength.

“Due to these dangers, we are urging people, particularly children and teenagers, not to swim in open water.”

CFOA's Water safety Lead, Dawn Whittaker, said "Most people would be shocked to hear that those people drowning just happen to be near water such as those running, walking and fishing. They are unaware of the risks and are totally unprepared for the scenario of ending up in the water. By highlighting this issue and making sure simple safety messages reach them we hope to reduce the number of these needless deaths."

Visit our water safety page for advice on how to stay safe around water.

Working as part of the National Water Safety Forum (NWSF), CFOA aims to reduce the number of drownings in UK waters by 50% by 2026. This is outlined in the UK's first Drowning Prevention Strategy, which was launched on 29 February by Robert Goodwill MP.

The water safety messages that fire and rescue services will be delivering will also raise awareness and support of the safety campaigns run by other members of the National Water Safety Forum (NWSF), which includes Royal Life Saving Society (RLSS) Royal National Lifeboat Institution (RNLI) and Amateur Swimming Association (ASA).