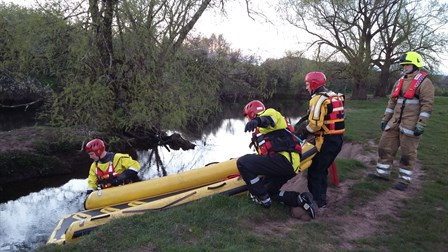 The Scottish Fire and Rescue Service (SFRS) led an evening operation to rescue four young people who had become trapped in the river at Cornton, Stirling.

Appliances from Stirling and Bridge of Allan along with the water rescue crew from Stirling rushed to the scene before 8pm last night (25 April).

SFRS Incident Commander, Area Manager Iain McCusker, said: “The girls had managed to get stranded on an island in the river with water levels rising.

“Our water rescue team waded in and used an inflatable rescue sled to reach them. They were rescued one at a time and taken across the water to waiting paramedics to be checked over.

“Thankfully, though a bit cold, none of them required hospital treatment.”

Adhering to some simple advice can reduce your risk of ending up in the water. By asking people to 'be water aware' fire and rescue services aim to reduce the number of fatalities.

Visit out water safety page for advice on how to stay safe around water.