A disastrous fire and explosion occurred at the premises of W. & R. Hatrick's Chemical Works, whereat four firemen of the Glasgow Fire Brigade were killed. 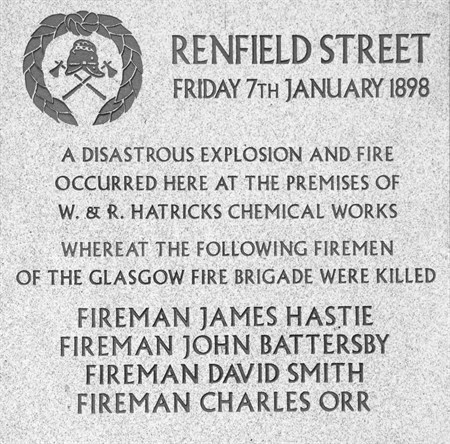 The bodies of the firemen were removed from the scene of the fire and delivered back to their homes, which was the practice at the time.

The Brigade was held in high regard by the public (as they protected factories and therefore jobs) hence the popular toast of the time "Success to the Glasgow Fire Brigade".

At this time, the firemen of College Street had a new comrade - Wallace 'The Fire Dog'. 'Adopted' by Glasgow Fire Brigade in 1894 after he followed a horse-drawn fire engine taking part in a Lifeboat demonstration, Wallace made his home at the Central Fire Station and ran with the GFB firemen to many fires until his death in 1902.