As a result of a disastrous and destructive fire during which the collapse of the property of Bowman's store occurred, Fireman Frederick True and Fireman James Farquharson of the Glasgow Fire Brigade were killed whilst firefighting. 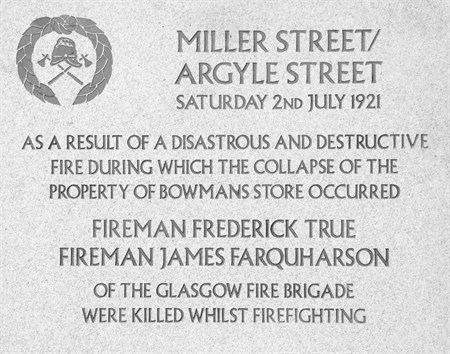 Firemen Farquharson and True served at the Western District Fire Station at Cranston Street in the Finnieston area of Glasgow.

A plaque presented by colleagues from Greenock commemorates their memory at Yorkhill Fire Station, which replaced the 'West' station in 1970.

As Glasgow advanced into the 20th Century, new technology was creating more employment.

However, new forms of entertainment presented problems for Glasgow's firemen as celluloid films used at this time were highly flammable, and combined with the heat from the cinema projectors, could burst into flame at any time.

The worst example of this was the Glen Cinema Disaster - a fire in a cinema in Paisley on 31st December 1929 which killed 71 children and injured 40.