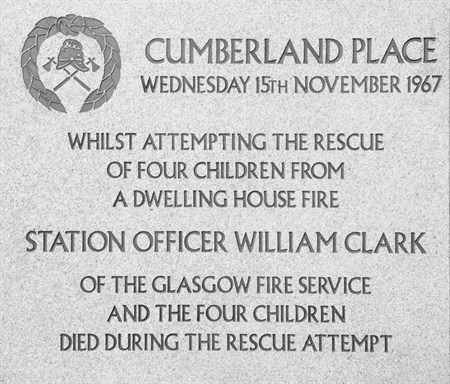 An overturned paraffin heater caused a fire in a council house in Hutchesontown in Glasgow's Gorbals. Four children under six years of age perished. Station Officer William Clark, aged 47, of the Southern Division Fire Station, collapsed and died while attempting to rescue the children.

Witnesses described the ferocity of the blaze. Mr. Archie Higgins, who lived in a neighbouring flat said "I heard the children screaming and rushed next door with some other people. We managed to force the door, but flames came leaping out and we were driven back."

Robert Conlan, a labourer, was in Cumberland Place on his way home from work when he saw the fire and climbed a ladder in an attempt to get in by an upstairs window.

"I smashed the window with my fist and stuck my head in" he said. "Then the flames burst up and singed my hair and eyebrows. I had to move back. There was nothing else I could do."