One of the Scotland’s most rural fire stations is leading the way for female firefighter recruitment. 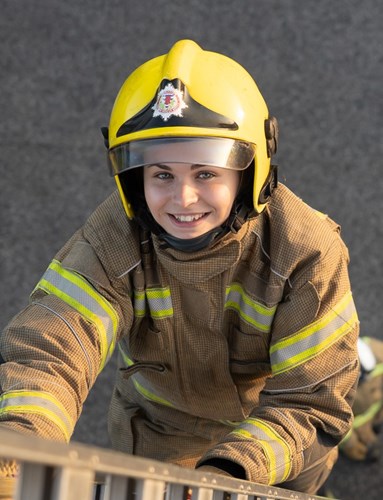 This bucks the national trend which sees, on average, less than seven percent of all retained firefighter roles taken up by women.

The five – who hold a range of occupations as their day jobs - are helping to break down the gender stereotype of what modern firefighter is.

What’s more the youngest female member of the crew is also trained to drive the station’s fire appliances – which is no surprise given her full-time job is as an HGV mechanic.

Believed to be the youngest serving female fire appliance driver in the Scottish Fire and Rescue Service 22-year-old Ashleigh Conner started her involvement with the Service in her teens as a member of its Young Firefighter (YFF) programme.

She said: ‘When the station was recruiting I decided that I would apply as I enjoyed my time in the YFF and it was a good way to put something back into the community. In 2019, as I had my HGV licence through my work, I was asked if I would like to go ahead and sit my blue light training to help out with a shortage of drivers at the station. I agreed and sat it in June 2019 over a week in Glasgow. Being used to driving country roads there was an adrenaline rush getting to drive under blue light conditions in and around the city. I am glad I agreed to do this and be a driver for Campbeltown and I would definitely recommend the blue light driving course to anyone who is interested.'

The station is staffed exclusively by retained firefighters, exceptional people who have work and family commitments but who are trained and prepared to respond at a moments’ notice to protect their community. Each of the crew members actively help promote the job to females who often don’t realise an operational role with the service is available on a part time basis.

Rachel McPhail, a 23-year-old project co-ordinator by day, has been a crew member for four years and like Ashleigh applied after enjoying spending her teenage years as a young firefighter. She explained her motivation saying: ‘The job itself is very practical and physically demanding, which I love, but I am also able to use my people skills and work as a valued member of the team.  It is a massive commitment but worth every minute. Now four years on the job I could not imagine my life without a pager. I’ve found I love giving back to my community and helping people.” 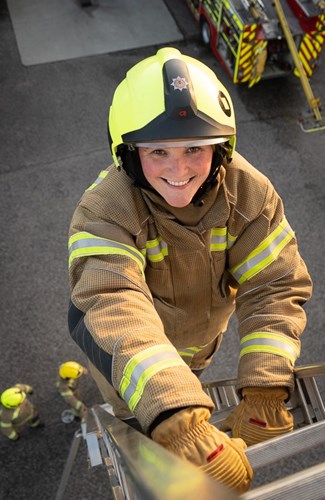 Retained firefighters commit to providing a set number of hours cover each month and attending a two-hour drill night once a week to maintain and develop their skills.

Michelle Morkel, proves it’s never too late to give up on your dreams. The 40-year-old postal worker used to sit on the yard wall as a child and watch the crew doing drills on a Tuesday night. She explained: ‘I always found it fascinating and exciting way back then, fast forward 30 years I finally bit the bullet and joined at the age of 38. Being a retained firefighter is the most rewarding job I’ve ever had. I would recommend it to anyone who likes job satisfaction. I only wished I had joined a lot sooner than I did.”

It was the family connection that influenced 36-year-old distillery supervisor Kerry Hastie to apply. She said: ‘My two uncles and older cousin were all firefighters so I was always looked up to them and was inspired by the brilliant job they done serving the community. I used to think my cousin looked so smartly dressed when I saw him heading to drill night and was proud of everything he done. My only regret is I left it till I was older to finally sign up.

Being fit is an important element of the job, particularly in rural locations as not every call-out is accessible by road. Kerry describes her most memorable moment saying: ‘It was a three mile hike up a hill to a forest machine fire then falling in a bog on the way back down! I don’t think my legs have recovered yet!’

She added: ‘I love the job I do serving the community and the unknown every time that pager goes it’s a complete adrenaline rush knowing you are going to help someone in need.’ 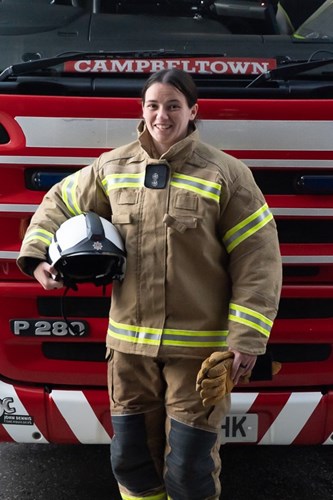 Kelly McSporran is also a graduate of the Campbeltown Young Firefighter programme, now known as the Youth Volunteer programme. After leaving school Kelly gained employment locally and successfully applied for the role as a retained firefighter at the station. Ten years on from joining Kelly is also now employed full-time in the service as the Retained and Volunteer Support (RVDS) Watch Commander looking after RVDS stations at Campbeltown, Carradale, Gigha, Tarbert, and Bowmore, Port Ellen and Port Charlotte on the Island of Islay.

The 29-year-old recalls her first call out saying: ‘This was the moment I realised at any time of day or night on any day of the year you may be required to stop what you are doing and attend an incident. My first fire call was in the early hours of a Monday morning to a dwelling fire. I was awoken by a pager alert and I quickly made my way to the station - within five minutes I was standing outside a property in the snow donning a breathing apparatus set awaiting my instruction which was to assist with firefighting tasks with the loft space of a building.’

She explained what’s kept her in the role for so long: ‘As a retained firefighter the variety within the role is massive, the range of different types incidents you attend and the fact that no two incidents are the same. I enjoy the variety and learning something new every day.’ 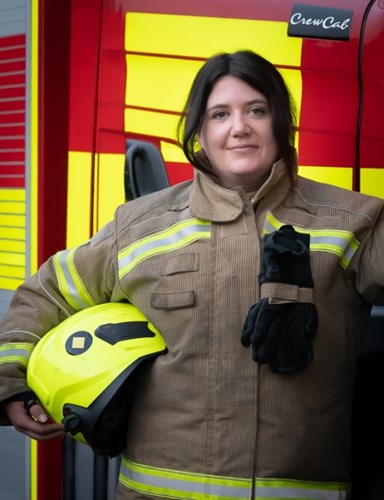 Station Commander Neil Willerton said: ‘As a service we want to reflect the communities that we serve and having almost 30 percent of our crew comprising female firefighters goes a significant way to helping us achieve that.

He added: ‘Every crew member brings a unique set of skills and experiences to the role and each one appointed has to go through the same rigorous recruitment process. I commend these five women for helping to show that there is no ‘typical firefighter’ and helping to break down recruitment barriers. I also want to recognise their ongoing commitment, together with their male crew colleagues, to keeping their community safe.

To find out more about becoming a retained firefighter visit https://www.firescotland.gov.uk/careers/retained-volunteer

We also have a Women's Information Session on Saturday March 5, 2022.