At the age of 50, Group Commander Murdo Henderson pulled on his trainers to increase his exercise and aid his mental wellbeing.

Over the last six months, he has racked up the miles and is on track for a marathon later in the year.

Speaking about his newfound hobby, Murdo explained: “I started running in November last year, well a lot more than I had before, and I haven’t stopped since.

“A colleague from Cowcaddens put me on to the FADS group and it’s been fantastic.”

The FADS group is Fit Ayrshire Dads, a Facebook group, initially set up for dads only. Now, the 3,000-strong group welcomes everyone from the area looking to get fit and healthy. The group also supports couch to 5k and the South Ayrshire couch to 5k group currently has more women than men.

He continued: “It keeps me motivated and I’d advise anyone to join a local walking or running group.

“I meet up with my group every Tuesday night, when I’m not on call, and do a 5K run.Fads Group 2

“There are some nights I can’t be bothered going, but there’s always someone there to encourage you and I always feel better after it.” 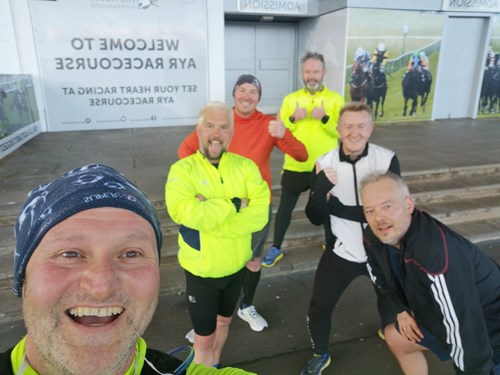 He said: “Exercise has a massive effect on your mental health – healthy body, healthy mind.

“There are a lot of people in the group with lived experience of mental health and it’s a great space to share.

“I’ve shared my experiences too and it’s a very supportive community.

During April, Murdo ran 100km which included a half marathon and has the marathon in his sights.

He explained: “I was building up to a half marathon and wanted to complete it within 50 runs, I managed it in 48.

“My next challenge will be a marathon in late Autumn for charity, in aid of my friend battling cancer.

“The support I’ve received from the group and colleagues in the Service has been fantastic and I hope to pay it forward.”