A group of rugby playing firefighters have presented Scottish legend Doddie Weir with a special fire helmet. They travelled to Doddie’s home in the Scottish Borders to say thank you and to acknowledge his support for the fire service rugby teams over the years. 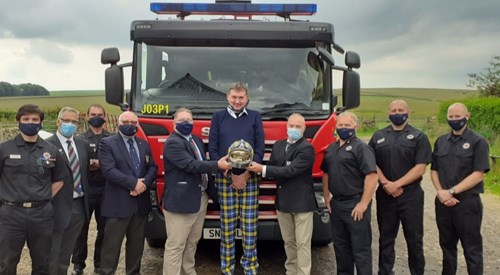 Doddie received a fire helmet which had been wrapped in the tartan of his charity, My Name’5 Doddie, which raises funds and awareness for Motor Neurone Disease (MND).

Retired Director of Rugby, Stuart said: “Doddie has always been a great friend to Fire Service Rugby in the UK. The men’s and women’s representative matches at Manchester and Percy Park Rugby clubs will long be remembered as some of the best and most entertaining events we ever enjoyed over the years, and lead of course by Doddie. We wanted to give him this unique Fire Service gift to show that we "UK Fire Service Rugby" are with him and his family and to thank him for his support.” 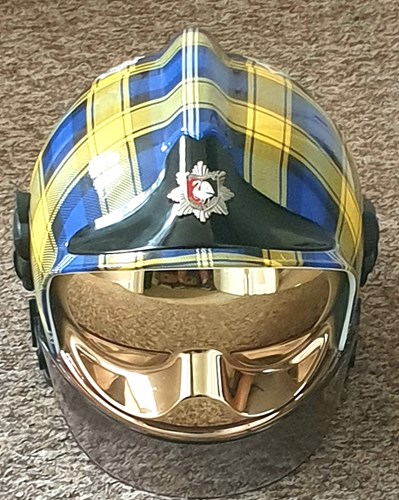 Local Senior Officer for East Lothian, Midlothian and Scottish Borders, Stephen Gourlay said: “We’re delighted to support our Fire Service rugby colleagues and to have our crews assist with this presentation, which was also attended by Watch Commander Callum Brown, who has played rugby with Doddie in the past. It’s important to do what we can to further raise the profile of Doddie’s charity and to help find a cure for this horrible disease.”

Watch Commander Farries said: “It was a privilege to be invited along to the presentation to honour Doddie. Spending time in his company on a Sunday morning and engaging in some Borders banter was a real treat and something I’ll always remember. He is an inspiration. His attitude, fight and determination are lessons for us all.”