One of Scotland's most senior firefighters has spoken about the tragic death of his son in an effort to help others across the Scottish Fire and Rescue Service. 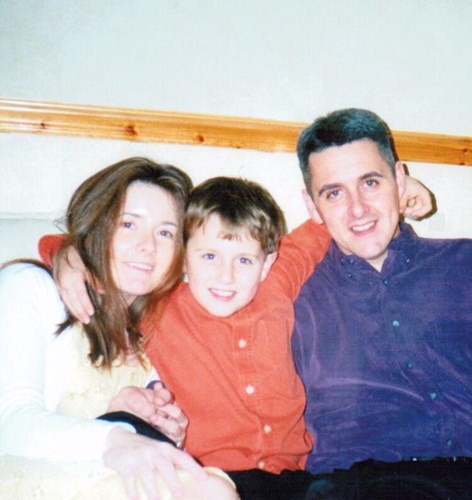 Ross was diagnosed with a virus, which left him paralysed and unable to communicate.

Throwing himself into his work, John chose to plough on, unable to bring himself to speak about Ross.

However, the trauma of losing Ross soon became too much and led to John suffering from depression and attempting to take his life.

It wasn't until 2017 that John confided in others about his feelings and started to recover.

Speaking with the Sunday Mail, the DACO revealed he is determined to help colleagues across the SFRS who may be suffering in silence and has played a pivotal role in the creation of a Service-wide Mental Health Strategy.

He said: "Losing Ross had a devastating effect on myself and my family. He was a lovely little boy, always smiling and so kind-hearted. We were all heartbroken and we all grieved differently.

“My way of dealing with it was throwing myself into my work and deliberately pretending it had not happened. I couldn’t bring myself to talk about Ross or even look at his photograph, whereas Anne talked about him all the time to keep his memory alive.

“I didn’t know it but I had really bad depression and eventually I ended up in such a dark place that I attempted to take my own life. Even after hitting rock bottom I carried on without speaking about how I felt to anyone.

“It wasn’t until three years ago when I felt myself going back down that dark route again that I opened up, first to my wife, then to my friends and then to my colleagues, who were fantastic and got me the help I needed.”

Determined to help prevent others experiencing what he did, John helped create the SFRS Mental Health Strategy.

Having already received royal recognition from the Duke of Cambridge, the strategy details how the Service plans to equip SFRS staff with the tools and knowledge they need to help look after their own mental health and that of others.

Proactive in its aims, the Mental Health Strategy is designed to prevent mental health challenges from gathering momentum.

DACO Miller explained: "The Scottish Fire Service has always been really good at supporting their staff once physical or mental health difficulties have come to light.

“But due to my own experiences with mental health I realised there was nothing formal in place to help staff spot the signs and get their colleagues help before they ended up in a dark place and that’s when I came up with the idea for the strategy.

“Due to my rank I have a voice and as uncomfortable as it is for me to talk about losing Ross it will show others that it is okay not to be okay and to ask for help. If our new mental health pledge catches just one person before they fall it will be worth it.”

Ross was only 10 when he became ill in March 2002 and was admitted to Wishaw General Hospital, where he fell into a coma before being transferred to Edinburgh Sick Kids.

There, Ross was diagnosed with Acute Disseminated Encephalomyelitis (ADEM) where a virus causes antibodies to attack the connectors in the brain.

Reflecting on the trauma, John said: “We were your typical happy loving family with two healthy boys who did taekwondo and played football. Then out of nowhere Ross took ill and our lives changed forever.

“After three months in intensive care he was taken off life support and we discovered he had something similar to locked-in syndrome - he could not move, he could not communicate but he was in there.

“Ross could not leave hospital because his needs were so great but after a year we made the decision to bring him home and turned our downstairs into a hospital room with oxygen machines and tilt tables. We had people coming into our house every day and night to give him support. During that time we never gave up hope but we never got any signs he was going to come out of it.

“Ross was prone to chest infections and he was in and out of hospital. He got a bad chest infection that turned into pneumonia and then into sepsis and this killed him.”

He added: “He passed away in hospital with us all by his side. The consultant asked was it okay to turn off his life support. No parent should ever have to go through that. Ross passed away on October 29, 2003 - three days before his 12th birthday and 19 months after he had first taken ill. We buried him a week later in Pittenweem. Fife.

“For the first year I deliberately tried to pretend it had not happened. I never visited his grave, I never spoke about him. I threw myself into my work. That was my escape. It was the wrong thing to do as I wasn’t allowing myself to grieve. I felt I needed to be strong for everyone else but as time went on my mood started to go down and eventually I tried to take my own life. I survived, my mood improved and I got on with life again but I was far from alright.”

The next time John found himself suffering, he confided in wife Anne, who made him an appointment with his GP.

Prescribed medication and encouraged to speak with his employer, John was signed up for 16 weeks of counselling.

It was only then that he felt his mood improve and found himself able to speak about his experiences.

John said: “Within a couple of months I went from not being able to talk to anybody and going down into a dark place to being able to open up.

“I realised lots of other people must be in the same position as me and might not know help was available. I wanted to make things more accessible not just for serving members and staff but for ex-members who sometimes struggle after they leave the service."

John continued: "We came up with the strategy which has the full support of our Chief Officer Martin Blunden and which we all hope will create a stigma free environment where people can open up to others confidentially and get support.”

“It’s great to have the full support of everyone from the Chief to the Scottish Government and even the future king. This just shows how important mental health is to everybody.

“I’m in a good place right now as I’m doing what I can to help others but I will never get over losing Ross. I can now look at pictures of him and although, I still get upset, I can remember the good times as well as the bad.”