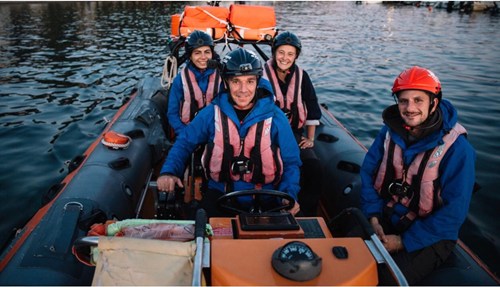 A selfless firefighter who helped save refugees from the clutches of the Mediterranean Sea has warned Scotland’s communities of the hidden dangers presented by water.

Scottish Fire and Rescue Service Watch Manager Jim Snedden recently returned from a third charity mission in Greece, where he helped rescue boats of migrants fleeing war-torn nations in an effort to begin a new life in Europe.

And, having witnessed the horrors of the Med and Aegean Sea, the experienced firefighter is reminding people across Scotland to be safe around the water and avoid tragic consequences. 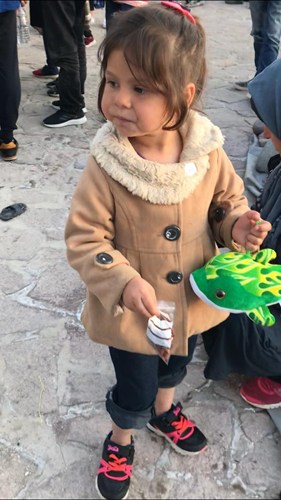 He said: “I’ve been delivering water rescue training to firefighters for 10 years and have had the opportunity to swim in rivers up and down the country.

“I’ve also been to Switzerland, where we took part in a horizontal ice rescue course –falling into frozen lakes – and have worked in the Med and Aegean Sea.

“I can honestly say the threat is the same no matter where you swim – and that very much includes Scotland, as we have rivers, reservoirs and a very large coastline.

“You need to know your environment, be confident and make sure you are aware of our safety advice.”

The dad-of-three continued: “When I was in Lesbos the temperature was 35 degrees. But when you were swimming in the Aegean Sea it was cold.

“You can still be affected by cold water shock and take that involuntary breath – even in the Aegean.

“It can cause blood vessels to close, heartrate to increase and lead to a heart attack – even the strongest of swimmers can be affected.”

The experienced firefighter, whose efforts saw him honoured with a Great Scot Award in 2017, was inspired to volunteer and use his skills after seeing the harrowing images of little Alan Kurdi - a three-year-old Syrian child whose body was found on the beach.

His latest effort saw him based on the Greek island of Lesbos with charity Refugee Rescue, where he helped rescue around 400 refugees.

While less people are now attempting to cross into Europe, WM Snedden believes more unaccompanied children are being placed into boats to brave the sea.

He revealed: “Back in 2015 there were hundreds and hundreds of people landing on the beaches.

“A lot of people are still in the forests in Turkey hiding, waiting for that window of opportunity.

“We were operating is a small area, but in an area that is heavily patrolled. Despite that, rubber dinghies would still get through – that’s where we would come in.

“A large percentage of people in each boat were unaccompanied children – kids ranging from two-years-old to 12-years-old.”

Remarkably, WM Snedden now plans on making a fourth rescue mission – this time with his 20-year-old daughter, Steph. He explained: “The more I get involved and see what small charities like Refugee Rescue are doing, the more I want to do something to help. “I wasn’t planning on going back, but Steph wants to go and volunteer with a land-based crew – so it’s only right I go with her to offer her some support. “This crisis is still very much ongoing. People are still risking their lives for a better life. “When little Allan Kurdi got washed up on the beach, it catapulted the topic into the press and that boosted funding for organisations. “But the reality is that something like that happens every day – people die every day trying to cross.” Assistant Chief Officer (ACO) Ross Haggart is the SFRS Director of Prevention and Protection. Paying tribute to WM Snedden, ACO Haggart said: “The Scottish Fire and Rescue Service is a humanitarian organisation – our firefighters are highly trained in water rescue to ensure they can protect communities here and we are always willing to assist in sharing our skills overseas where necessary. “We exist to help prevent harm and keep people safe – WM Snedden is a shining light of these principles. “His work to help support vulnerable people going through the kind of trauma most of us could never imagine is inspiring. “On behalf of the entire SFRS, I would like to thank WM Snedden for his service and selfless contributions both here in Scotland and overseas.” For more information on how to stay safe in and around water visit ww.firescotland.gov.uk/your-safety/water-safety.aspx