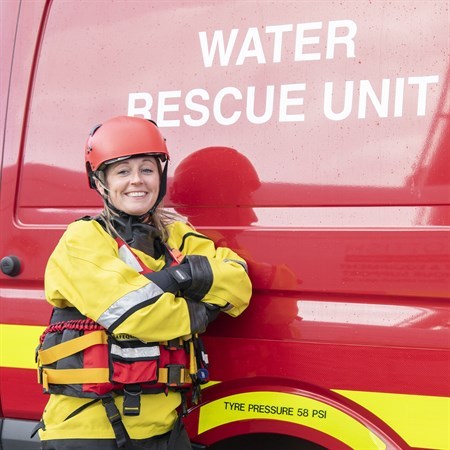 A pioneering firefighter is urging others to follow in her footsteps and join the Scottish Fire and Rescue Service.

She has spent seven years protecting communities and is hugely passionate about the job she does.

Since starting life as a firefighter in 2012, Nicolle has helped protect communities, played a role in highlighting the dangers of careless driving and driven close to 2500 miles in a fire engine as part of a humanitarian effort.

As the SFRS prepares to launch a national recruitment drive seeking wholetime firefighters, Nicolle has reflected on her own career and has told why she is keen to see people from all backgrounds follow in her footsteps.

Nicolle revealed: “I went into the role not knowing what to expect, if I’m honest…but I fell in love with the job.

“For me, it is the best job in the world.

“I’ve gained a great deal of self-confidence and have learned numerous skills.

“I’ve found that within the Service, you can go down lots of different paths and progress – and not just as a firefighter.”

Through her work with the SFRS, Nicolle became involved with a charitable effort that saw her become the first female firefighter to drive a fire engine in Moldova.

Nicolle reflected: “Since becoming a firefighter I have had so many opportunities.

“I’ve been part of charity events, open days, road safety exhibitions - and have even managed to get to Moldova.

“I’ve seen parts of the world I never expected to.”

The SFRS has female firefighters working at stations across Scotland, but Nicolle set the benchmark by becoming the first ever female retained firefighter in Buckie.

And she has formed a closely-knit relationship with her crewmates both in Buckie and Aberdeen.

The 33-year-old would like to see more females consider a career with the SFRS and revealed her 15-year-old daughter, Kayla, is dreaming of becoming a firefighter one day.

Nicolle said: “When I joined Buckie I was the first female to work at the station and I’ve been treated as part of the team since day one.

“When I joined I just wanted to get stuck in. There was no way I was going to be the weakest link.

“People may think this is a male-orientated environment, but each individual within the Service has their own strengths. We need the best people attending incidents.”

She added: “Kayla has told me she wants to be a firefighter, but she’s still at school doing her exams just now.

“She has grown up and has seen the work I do, so it must have rubbed off.

“My message to anyone thinking about applying to become a firefighter would be go for it. Believe in yourself - because you can do it.”

Applications to become a wholetime firefighter are now live on MyJobScotland - follow the link to start your application now - https://www.myjobscotland.gov.uk/emergency-services/scottish-fire-and-rescue-service/jobs/wholetime-firefighter-149388?from=org