Via Sunday Mail - Les Mason says he's 'sticking the middle finger up to Mother Nature' as she 'calls the shots' when it comes to miscarriage. Words: Heather Greenaway 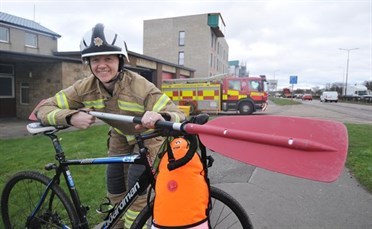 He will cross from coast to coast, becoming the first person to run, swim, kayak, cycle and climb the width of Scotland in just 24 hours.

Even for super-fit Les Mason, the epic 125-mile challenge is immense but the firefighter has a unique reason for taking it on.

The 38-year-old wants to do battle with mother nature as he and wife Alana, 33, have suffered the heartbreak of four IVF miscarriages in their fight to become parents.

Les, based at Sighthill Fire Station in Edinburgh , said: “It’s the first time this unique route has ever been attempted. It’s my way of sticking a finger up at mother nature. When it comes to miscarriage, she calls the shots so this is a way for me to take on mother nature and win.

“Losing four babies has been tough but we got through it and I will do this.

“After each of our losses, I felt like a failure and ashamed for not being able to keep my baby safe when I spend my days saving the lives of others and keeping the public safe.

“I was a helpless passenger just watching events unfold. Doing this challenge is a way for me to regain control and help others facing the trauma of miscarriage.”

The watch manager is planning to become the first person to run, swim, kayak and cycle in a straight line from Montrose, Angus, in the east to Ballachulish in the west Highlands in just 24 hours (From Wednesday 1st to Thursday 2nd May).

Les, who has trekked across the Arctic Circle, said: “I chose this specific route as it is doable in a 24-hour period, albeit very challenging to achieve in that timescale. 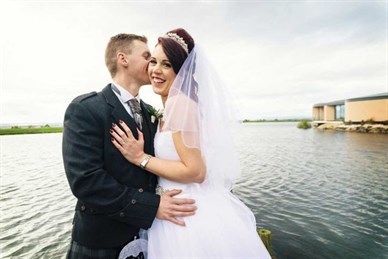 “It is a natural corridor that stretches through the southern Highlands and encompasses a landscape that lends itself to cycling, swimming, kayaking and running in a westerly direction.”

Les will have to battle his way across several lochs and scramble up Glen Coe’s Aonach Eagach – the narrowest ridge on the British mainland – to raise money for miscarriage and stillbirth charity Tommy’s.

He said: “It’s no easy task but, as a firefighter, I have planned and risk-assessed everything to the final letter.

“I am being supported by former firefighter Lee Peyton, who runs Breaking Strain Events and has lots of experience tackling difficult challenges.

“Earlier this year, I was a leader on one of Lee’s expeditions in the Arctic Circle, where I trekked 80km in –40C, so we are both used to tough terrains. Lee will make sure I am getting enough food, fluid and breaks. I will have someone monitoring and accompanying me on every section, be it a climber with ropes in Glencoe or a rescue boat when I’m doing open-water swimming.

“The Fire Service have been behind me every step of the way. Hopefully it will make people talk about what is a taboo subject.

“Unless you have been through it, you don’t know. It’s so hard when folk say it wasn’t meant to be as you know you’ve lost a heartbeat, a life and a future with a child you will never meet.

“The miscarriages made me feel helpless but by doing the challenge I am now helping others and don’t feel so useless.”

Property adviser Alana, who married Les in 2013, said: “We had been trying for a baby for a while with no success and in November 2013 were told we would have to go down the IVF route.

“We started treatment in 2014 and had success straight away. We were over the moon and, at our six-week scan, all was well. It was at the 12-week scan we discovered that the baby no longer had a heartbeat. 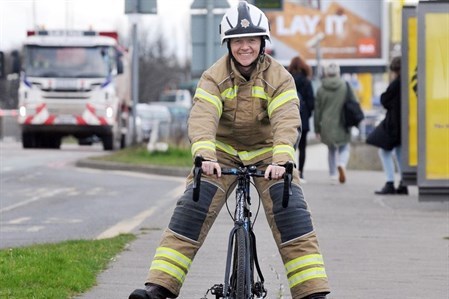 “We waited six months and started our second round of treatment. Again, I fell pregnant and, at the 12-week scan, we were given the same awful news – no heartbeat.

“We went on to have another two successful treatments in 2016 and 2017 but they too ended in miscarriage. We are all about looking forward, not back. We just moved on and started planning what came next. We are quite resilient.

“After the last miscarriage, we decided to stop and breathe. We had been living month to month for four years. We are not going to let it dictate our lives but we are saving up for private IVF.”

Les, who struggled with his emotions after each loss, has called the challenge Chasing Our Rainbow as children born after miscarriage are often called rainbow babies.

He said: “I was trying to be the man I thought Alana needed me to be – tough and strong – when really I felt powerless.

“Organising the challenge has helped me put my feelings in order and I’ve been surprised at how many friends and colleagues have shared their experiences of miscarriage.

“No one can tell us why they happen. That’s why charities like Tommy’s are invaluable as they fund research into the mystery that is miscarriage. That’s why I’m ready to run, climb, swim, cycle and kayak to support all those who are chasing rainbows.

“Hopefully one day we’ll have our own rainbow baby. We won’t give up hope.”

Martin Blunden, chief officer of the Scottish Fire and Rescue Service, said: “I understand the real and emotional effect events such as miscarriage can have on individuals and couples.

“So I pay great tribute to Les for drawing on our fire service values and strengths in such a positive way to assist others. We’ll fully support him through his unique journey.”

This article was originally published in the Sunday Mail newspaper on 24 March 2019. Images: James Williamson