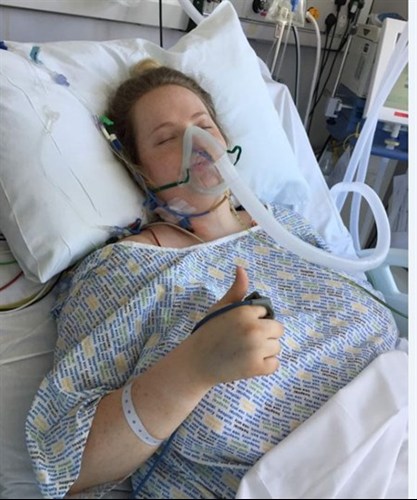 A woman who escaped death following a devastating car smash is appealing to young people to stay safe on Scotland’s roads.

Bryony Lovett had to teach herself to walk, talk and eat again after she was involved in the horror collision in June 2017.

And she is now assisting the Scottish Fire and Rescue Service by sharing her powerful story with school pupils - so that they do not become another bleak statistic.

Brave Bryony, of Johnstone in Renfrewshire, said: “I should be dead … I know that.

“My mum was told I was going to die and, if I did survive, it would be a different Bryony – with a cognitive impairment.

“Instead of planning my 21st birthday earlier this year, my family could have been visiting my grave. I do feel like I have been given a second chance and I want to use that.

“I wasn’t speeding, or playing with my phone – I did nothing wrong. But I was involved in this terrible crash and want other young people to know what happened to me - because I want to make them think twice before they get behind that wheel.”

She added: “Firefighters attend at some of the very worst traffic collisions and that is why they work so hard to prevent them from happening in the first place. I want to play a part in that effort – because it could save a life.”

Her life unravelled when her car skidded on spilled fuel and careered into a lamppost near her home town.

Bryony suffered a catalogue of shocking injuries - including a fractured spine, punctured spleen and lacerated liver.

She was rushed to hospital and almost immediately placed into a coma – with her family summoned to her bedside to say their goodbyes.

However Bryony survived and went on to spend close to three months in hospital, both in Paisley and Inverclyde.

During her hospital stay, she went through a punishing rehabilitation schedule that saw her learn “how to function again”.

Bryony recalled: “It was like being a baby again and having to learn everything. I couldn’t do anything for myself.”

After weeks of rehab, Bryony was discharged from hospital at the end of August 2017.

Medical staff had anticipated her being in rehabilitation until Christmas, but Bryony’s determination to continue with her life saw her defy the prognosis of medical experts.

But seeing younger brother Harry compete in the UK Special Olympic National Games - and beginning the third year of her politics course - were two sources of inspiration which spurred Bryony on to progress far quicker than even she could have anticipated.

“I set myself three goals and the medical staff didn’t think I would achieve any of them…but I did all three,” explained Bryony.

“I needed to get myself out of hospital.

“The staff were exceptional, but I wanted to get on with my life.

“Everyone said my recovery was miraculous.”

Bryony is full of admiration for the medical staff who helped on her journey to recovery, but reserves special praise for brother, Harry.

Harry competes in judo at contests around the UK, with Bryony and her family always present for support.

However, following Bryony’s crash, it was roles reversed and the 20-year-old became his big sister’s “cheerleader”. 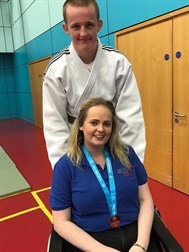 Bryony revealed: “I’ve followed Harry around the country competing, and have always been his biggest cheerleader.

“But after my crash he became my cheerleader and helped me with everything.

“I was allowed out of hospital to see him compete in the UK Games and he won a silver medal.

“After he was presented with the medal, he came over and handed it to me.

“He said I deserved it more.”

Bryony is now making the most of her second chance at life and is currently working to complete her dissertation.

The politics student recently returned from Disneyland after boyfriend, Josh, made good on a promise made while she remained in a coma.

The support of her family has been a constant throughout her recovery.

Bryony revealed: “I’m obsessed with Disney, so Josh promised me he would take me there if I pulled through.

“He organised it and it was amazing.

“My stepdad promised me a pet alpaca as well, but I’m still waiting for that!

“My family have been there for me throughout and we’re definitely closer because of what happened.

“My mum basically became my social secretary. She organised everything for me, even things like phoning the doctor for my medication.

“Everyone stepped up and really helped me. I’m very lucky.”

In addition to returning to work and completing her studies, Bryony has taken the opportunity to visit and thank the firefighters who helped rescue her from her crashed vehicle.

She has also teamed up with community firefighters to deliver hard-hitting road safety presentations to young drivers.

Bryony revealed: “It was nice to be able to meet and say thank you to the crew. I didn’t want them to ever think: ‘Did she make it?’

“Part of their work saved me.

“Thanking them was very important to me.”

Bryony continued: “I now have the opportunity to share my experience with other young drivers.

“I’m not the kind of person who can keep things bottled up, so if sharing my story saves one person, then that’s my job done.

“I want to tell people that they don’t know what’s going to happen tomorrow – so pay attention on the road and be as careful as you can possibly be.”

Steven Smith is a community firefighter based at Paisley Fire Station and helps deliver road safety awareness presentations at schools throughout East Renfrewshire, Renfrewshire and Inverclyde.

The experienced firefighter reached out to Bryony and asked her to speak with students after hearing her story.

He admits to being “lost for words” by Bryony’s bravery.

Steven said: “It takes enormous bravery to share what Bryony has shared.

“Bryony’s is a story of survival – she is a remarkable young woman.

“We hope the kids that are listening to Bryony’s story pass that information on to their kids and, eventually, their grandkids.

“Ultimately, we want people to listen and think about what they are hearing and to become safer drivers.”

He said: “The power of Bryony’s story is incredible and the strength she has shown in sharing it is inspiring.

“She has added such an impact to our road safety input in East Renfrewshire, Renfrewshire and Inverclyde.”

To find out how to stay safe on Scotland’s roads, visit: www.firescotland.gov.uk/your-safety/road-safety.aspx